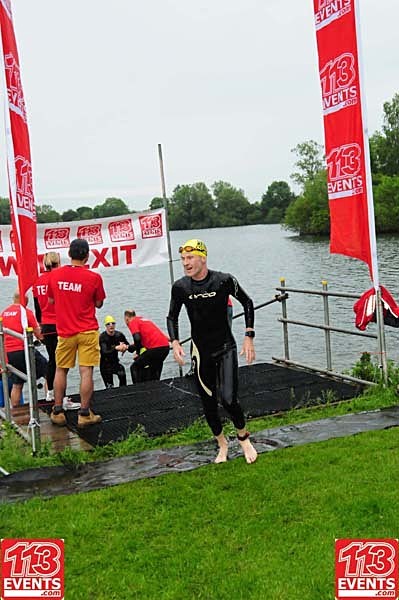 This was my second ‘half ironman’ distance event. The course showed as pancake flat so would never get easier (that’s a relative term). This year I had Kamal as a training/racing buddy to be the chimp on my shoulder when I started to waiver.

The warm dry weather of earlier in the week did not last. It was wet and cold. Nice.
The swim went well with Kamal and I going side by side almost the whole way. This cheered me greatly being the weaker swimmer and a sub 30min swim left me well chuffed being almost 4mins quicker than a previous race. Note – 5:30am winter swim technique & training sessions were worth it after all.

Transition 1 uneventful, if a little slow and onto the bike (cue rain). 90k 2 laps. After the first lap my hands were so cold it was difficult to change gear/brake. And the thought of another lap did not fill me with joy. But seeing my buddy at the turn point only a couple of minutes behind me focussed the mind. In the end I averaged 32kph.

Transition 2 was a bit comedic. With such cold hands I couldn’t unclip my helmet, take my shoes off or put my trainers on without plenty of grimacing, huffing, puffing and the odd expletive. Oh, and my feet, I had to look down to make sure they were still attached to me. Zero feeling.

Once I warmed up a bit the run was solid (1:42) and I was kept honest with the thought that Kamal could appear at any time being a slightly faster runner than me. This did not happen because unfortunately my buddy had a wipe out on the bike at 73k and was not able to follow the old adage and get back on his bike. That’s important and simply means we’ll have to do it all over again!