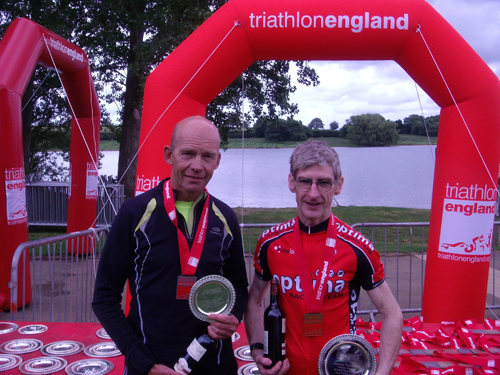 Conditions at the start echoed other races this year – a cool, blustery day, with a 100m reduction in the swim due to the choppy state of Rutland Water and a massive field of competitors. The slightly long bike course of 42km and the chilly lake had clearly not deterred all those motivated by the Brownlees Olympic performance.

The race started slightly late as the new barrier system installed by Anglian Water at the entrance to the venue defeated even the normal slick organisation of the event. Another good reason, at least for me, to camp overnight – Oakham village is close for all the normal things like a good dinner, and being only 400m from transition makes setup  easy.

The slight change in the swim meant the possibility of a “Bevan Docherty” start, so like half my wave I could walk/wade the first 100m or so, although the mixture of sharp gravel and mud underfoot did not make for easy or painfree progress. The water turned out tot be warmer than it looked and slightly less choppy, so after the usual search for some friendly feet, we all staggered up the ramp and onto the bike. Blustery conditions meant too much riding on the drops rather than the aerobars, but rather that than into the hedge! The course has three sharp climbs early on (think Kingston Hill) followed by miles of flat/descending roads with a good surface, with a final climb at about 30km and a roller coaster finish. The run follows the lakeshore, and allows you to experience the sights (and smells) of England’s (formerly) smallest county. This year, an out and back course meant a) a true 10k – previously a mult-ilap course meant a slightly shorter run, and b) at least 5k head-on into the blustery winds previously featured on the bike. At least the blustering helped blow everyone home. 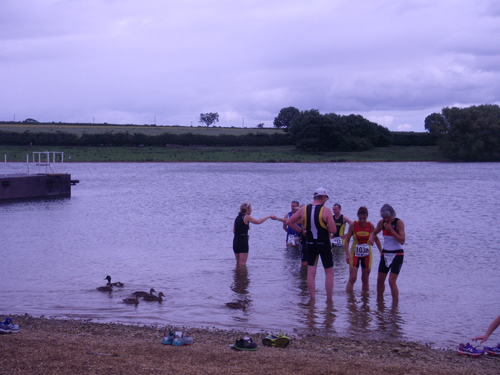 Unlike elite racing, it’s often no clear how you have fared until well after the finish, so I was eventually very happy to find I’d placed first in my age group – qualification for the London Worlds in September had been delivered! Also another silver plated frisbee from the race organisers, and in theory a Triathlon England medal as English champion (always sweeter for a Scot…). However those medals in the photo belong to some of the women’s AG winners – the real deal is in the post (we hope!).