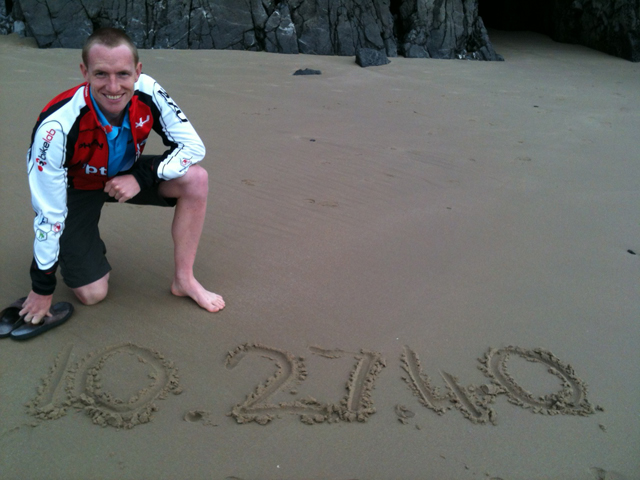 The first time I saw the bike course for Ironman Wales was back in June when I went down for the Long Course Weekend (a great event which I can highly recommend).  I only did 72 miles of the 112 mile course, and it absolutely tore me apart.  I was terrified.  ‘Heartbreak Hill’, the third and longest 16% climb within the space of 5 miles at about mile 65, was agony.  And as the sign they put up on Ironman day said, for the Ironman, “it’s so good they climb it twice”.  Ouch.  The day I got home, I went to the bike shop and bought myself a bigger cassette, and started to brace myself…

But cometh the hour, cometh the Ironman, and so on September 16th I lined up with 1600-odd other certifiable folk, pretended I knew at least some of the words to the Welsh national anthem, and threw myself into the really quite cold waters of Tenby’s beautiful North Beach.

55 minutes later (and slightly smug – target was 57), I emerged and started the first comedy feature of Ironman Wales – an 8 minute run up (and I mean UP) and into the town to transition.  Now for the evil that is the Wales bike course.  And it was pretty evil – though much better for me than for hundreds of the other poor b*ggers who clearly didn’t know what was coming.  Come the second ascent of Heartbreak Hill, I’ve rarely seen an image of agony more evocative than that on the face of the poor guy I overtook who was still on his first lap.  I think he was actually crying.

Heartbreak Hill surmounted and survived, I headed down into Tenby to complete a 6 hour bike leg (too slow to be competitive really, and definitely the leg I need to work on, but at least there was still some in the tank) and started to think about the flat-Pepsi-fuelled leap to the next level of insanity that I was about to take.

I’ve long thought that the moment you go into T2 in an Ironman must be a moment you meet a really interesting version of yourself.  Let’s face it, you’re about to do something that 90% of humanity considers utterly ridiculous, and you’ve just spent 6 hours flaying yourself up and down hills.  I wasn’t wrong, but ‘T2 Jon’ was a really angry guy and not someone you particularly want to meet, so let’s move on…

The marathon, bizarrely, was for the most part a total joy.  This was the bit I’d worried most about, and trained hardest for – the 20 x 800m reps in a rapidly darkening Barnes track hours after the Juniors had headed for home directly played through to the race, as I split it down into 20 x 10 mins and just kept coaching myself through on cadence and heart rate.  What with that, and the moments of levity provided by James’ idea of encouragement (I still hear “Come on the Ginger Mole!” in occasional nightmares), I got through pretty well, clocking 3:17, and finishing in a creditable – but slightly further off the Kona pace than I would have liked – 10.27.40

Huge thanks go to parents, coach, Emma B, friends, teammates (particularly the mighty Tommy C) and my far better half Jane for their support on the day and through the training…  an Ironman is very definitely a team effort, and I can’t think of a better team to do it with than the Optima Massive!