Race day dawned bright and clear with no wind. This was a big plus compared to the previous two years, when the rain and high winds had caused havoc. The organisers had remembered the weather – transition was indoors in the Echo Arena. This meant my bike was kept warm and dry overnight – just like home!

Meanwhile I was staying across the river at Bromborough, and once through the tunnel was quickly at the race venue. BTF had splashed out for a big screen and live video coverage as well as TV coverage of the elite race – thankfully not me! After the kit setup and walking what felt like endless corridors to and from transition to get that picture of “where’s my bike?….” firmly in mind it was time to hurry up and wait until it was time to start the deadly Optima warmup. As normal this caused lots of interest (and hopefully fear) among other competitors before lining up on the jetty and easing into the slightly salty, but warm(ish) waters of Queens Dock. The swim has a really wide start and after the first blast I was lucky enough to find some nice feet to follow under the bridge and on to Dukes Dock. Once out, the organisers had create a new event called “get your wetsuit into a red big bag…” This saved getting water all over the nice arena as we squelched off to get to our bikes. Gained about 70sec on the swim, lost about 6sec on T1. 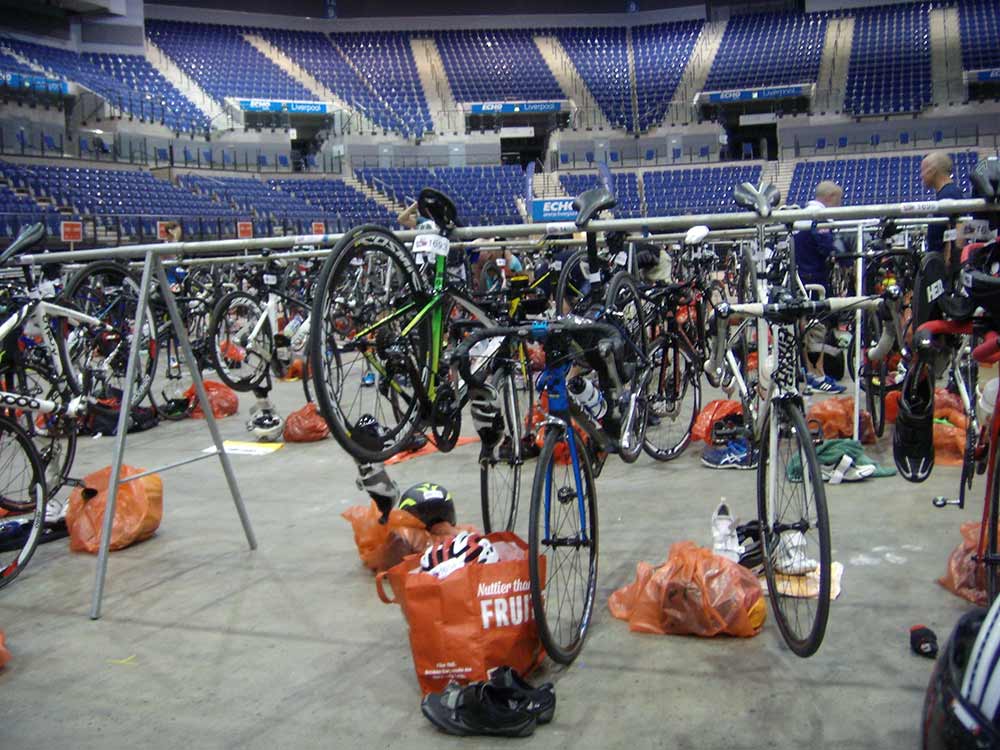 Some of the cornering on the way to the bike racks was challenging to say the least – dock water and slick concrete don’t give lots of grip for bare feet, but crabbing round the bends meant the bike soon was visible and the red bin liner could be exchanged for helmet, shoes and bike. Liverpool shut 10km of roads through the city centre, so a flat four lap bike course followed. This was quite busy with other competitors and narrow in places, but I’d no real problems with congestion. Near the Arena area lots of spectators lined the streets, so although rather a grey day, there was a good atmosphere. However four laps means it’s hard to work out where you are in your age group, and whether you are holding, gaining or loosing places. My usual strategy is to imagine everyone is either in front of me and can be caught, or is just behind and gaining fast (depending on whether there are lots in front of me or not) and keep working with one eye on my power meter – or gearing and cadence if you don’t do power. This sort of worked – I lost about 2mins on the bike leg, but luckily to someone who was 4mins behind in the swim, and managed to squeeze a few secs more (well 2secs actually…) through T2.

The run was round the famous Royal Liver Building, complete with copper bird statues, but preceded by some old cobbled streets from the time when Liverpool Docks ranked with London for trade. Straight off the bike cobbles are hard work, but after a km or two the wobbling stopped and something more like running started to happen. “More bricking required”…..” has been my reaction to triathlon runs this season and Liverpool was no exception – it still did not feel like normal running…one day I’ll get this right. Still good enough for the fastest run and overall victory by around 4.5minutes – I was British Champion! (for old geezers….).

A visit to the podium always casts a rosy glow over everything, but how to sum the day up? 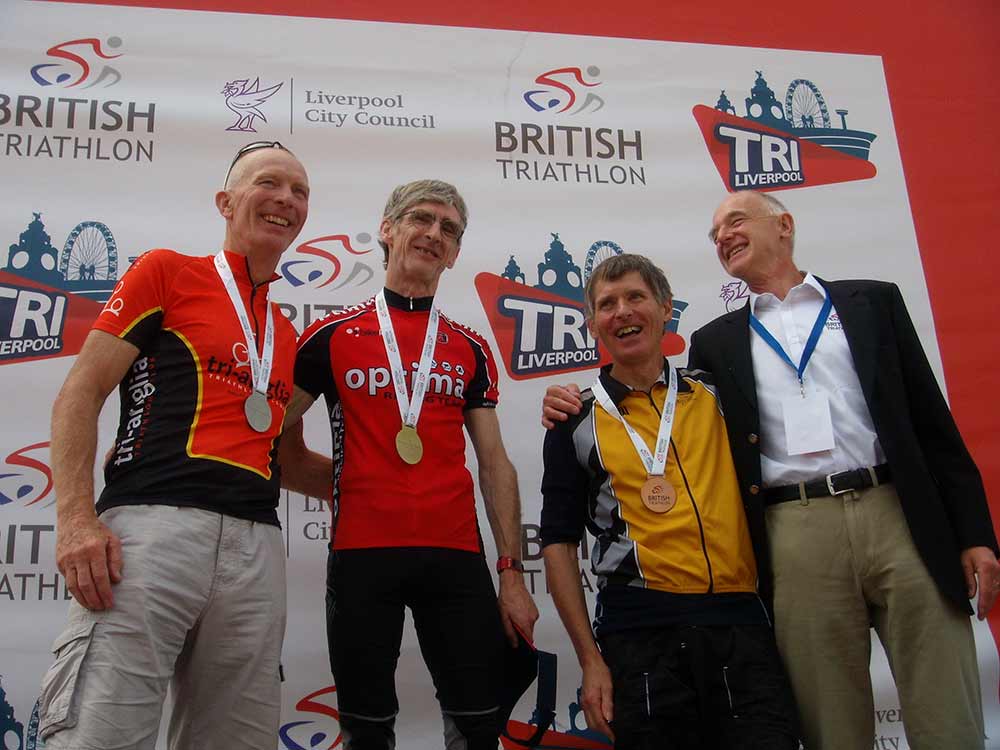