On the 10th July, I competed in the Women only Shock Absorber race in Eton Dorney. It was an all ages wave, however I was the only competitor in my wave in Tristar 3, and it was the only event open to me, as I am 12 years old.

The swim was 200m and, as it is my best event, I found it quite easy. I was second out of the water with a time of 2.36 and ran to my transition spot. My first transition time was 1.15 and then I ran to the mount line and mounted my bike, ready to start the 5.4k cycle around the lake.

My cycle time was 12.04, much improved from other Dorney Lake events last year. In the first part of the cycle, I overtook the lady in front of me and went ahead, I was currently first place. Near the end, I turned around for half a second and saw many people chasing me so I pedalled harder and got away from them. As I reached transition and put my bike up on the rack, I was still first place and my second transition time was a quick 0.46. 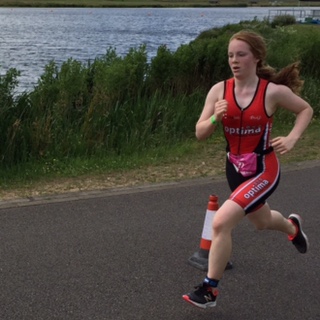 As I ran out onto the 2.5k run, I heard many people cheering which urged me to work harder. Soon after I started, I was handed an isotonic electrolyte drink in a cup. I had a sip and then took another mouthful but I took too much and it spilt all down my mouth and onto my chin! It was really sticky!! As I continued my run, I overtook some people an on my way back saw someone coming up behind me. I tried to lengthen my strides and take more efficient breaths in order to make me go faster. Luckily, I got away again. Close to the end of the run, I knew I had a good chance of winning and tried to pick up my pace. As I crossed the finish line I felt so relieved that I had actually finished considering I had never done that distance before. I was also quite proud of myself because it was the first time I had ever won a triathlon.

Overall, I had a brilliant time at my triathlon and I cannot wait until September when I do my next one!