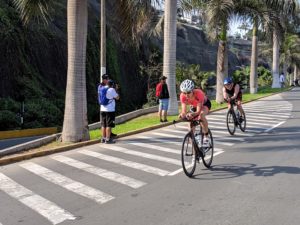 Lima. A 70.3 race on a weekend we are landing in the capital of Peru.
This had to be it – my exotic ’once in a lifetime’ A race of 2019. Packaged with a 15 day exploration of Bolivia and Northern Chile including the world’s highest navigable Titicaka lake, the famous Salar de Uyuni as well as Siloli and Salvador Dali deserts and one of the world’s longest mountain ranges – the Andes, a 70.3 in Lima was a perfect way to kick off a long waited vacation.

I arrived to Lima on Friday, 2 days before the race. Having read the previous race reports promising a city berried in clouds and a mild prewinter temperature; i tried not to think about the bright glaring sun, clear sky and a temperature of high 20s I was greeted with. The taxi driver confirms Sunday is to be hot – unusual for this time of year. (Not unusual for my luck though).

Shortly after arriving to the hotel and checking that my bike arrived in one piece I made my way to the IM village to register and familiarise myself with the venue. The atmosphere in the IM village was surprisingly quiet and chilled. Anyone who has experienced the big city traffic in Latin America would appreciate that riding to the race venue on Saturday was “fun”! I got there in the end and my pre race day pick ups were done too. The transition set up was mostly done on the actual race day so there was little to do apart from leaving the bike and familiarising myself with the ocean swim. The coast looked vast and calm. I befriended some fellow triathlete buddies from Chile and practiced my first open water swim since months (one of the downsides of an early season race!). It felt great. The water temperature was cool – perfect. I even practiced the “dolphin dives” and it all worked well. All i had left to do now was attend the race briefing and get a last proper nutritious prerace meal – being in the capital of the world’s cuisine of the moment that was something to look forward to.

The race morning was buzzy; full of adrenaline and nerves in the air. As expected the competitors mainly travelled from all across the Americas. There were a few British girls including Lucy Gossage in the elite pack, but I was definitely the only Lithuanian! The transition and swim start were lined with dozens of race support staff. Apart from a race number, every competitor had their age marked on the left calf – I must say, a rather good distraction during the race (although I’m not sure this would be received as well at European races!).

The elite packs kicked off at 6.30 and 6.40. The rolling start was smooth. The course was clearly marked with orange and yellow buoys. My plan of a swift first buoy pace start was quickly thrown out of the water as my goggles came off as I dived in the 2nd time. Everyone’s got a plan until they’re punched in the face – right? I knew I had a chance of scoring a solid personal best in this race. The 12 weeks training program I had undergone with James Beckinsale put me in a strong position and I had high expectations of myself to keep up the pace. All of that in my head, I had to wipe off the disappointing start and get to the bike quick.

The swim was slow but I managed to just get in within my race pace brackets. The wetsuit striping service was a fun surprise. Before I knew it, I was on the floor and my wetsuit was off my feet! Within 2min I was on my bike. The 4 lap course was mostly flat with a few hilly pick ups followed by fast descents. The lap course meant I could keep an eye on my times for each lap and also that we had shared the road with pro athletes as they zoomed through. As much fun it was for us, age groupers, to find ourselves in the midst of a pro chase at times, I’m sure this wasn’t so convenient to them!

The bike course was fast and smooth. After averaging over 34km/h after 2nd lap I knew I can roll on and finish with a better bike split than I had imagined. My legs felt fine and I was off to the last leg at a good pace. The run course was crowded. At times the path was too narrow for 2 competitors to pass by side by side. It got to a late morning and the heat started getting into you. Even though they said there won’t be any ice at aid stations, the race support were throwing handfuls of ice at you shouting ‘hielo hielo’ as you run by. One could not escape the mutual feeling of agony during this last leg of the race. 2km in and my pace dropped. Despite desperately trying to clear my mind, I couldn’t keep my pace up. I could feel blisters on my feet and I couldn’t switch off the pain. Despite what felt a really slow and disappointing run, I clocked a solid PB of 5hr 10min. I would lie if I said I was pleased with it right from the start ? . It took me a few days to get over my run after which I could appreciate my ridiculous strides in performance gains over the last 18 months. For me, it’s not just about a one dimensional result of getting to the world champs, it’s more about standing against myself, shaving off seconds, minutes, feeling strong fighting the physical and psychological challenges this sport brings day to day. I loved this race – the people, the city, the food, the course… and I hope to be back one day – with improved Spanish!