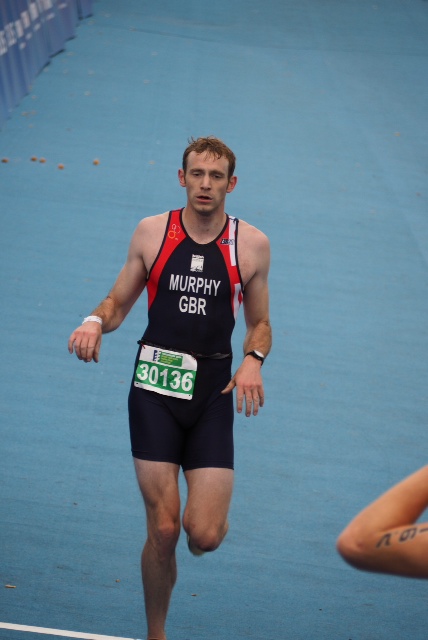 First world champs, a lot of fun. My aim at the start of the season had been to qualify, and with that in the bag not to embarrass myself too badly. With this in mind I tried not to put too much pressure on myself and turned up at the start feeling probably a bit too relaxed (nothing a bit of music selected from a playlist fit for a rebellious teenager can’t sort out).

The swim was in a lake / duck pond which was no more than 5ft deep. Given that you could see the bottom and the organisers had seen it fit to add chlorine, it was basically a swimming pool. The swim start was from a beach pontoon which was my first experience starting out of the water, I found this a lot less stressful and cleaner than a deep water start with none of the associated shenanigans. After belting it to the first buoy on Gills advice, I tucked into a pack and was having a nice swim. That is until we came upon the masses from the wave in front of us and then it all became a bit of a mess.

My rather annoying swim time of 20 mins dead put me in the mix and after completing the epically long transition I settled down for an hour or so of watching people pass me on the bike. At this point it was hard to tell position as there was nothing to distinguish age groups, I knew I would most likely drop some places but tried to keep concentrating rather than engaging in a game of guess the age. The bike was largely uneventful on mostly nice roads with a few hills. There was drafting, mainly from those of North American origin, but I certainly wasn’t innocent either.

Off the bike and onto the run I tried to remain calm and not get carried away, I think the phrase is “keep it in your pants”. Inevitably, this plan failed. Presented with people to run past I went after them until the competitors in front of me began to thin out, and then all but disappear. At the time I remember being a bit confused about this but I was mainly focusing on the chaffing that my crappy tri suit was inflicting on my thighs.

Hard across the line to make sure of a suitably horrendous finish line picture (see below) and then being told that I couldn’t collapse where I wanted to because that area had to be kept clear. There was then an excruciatingly long wait for the results to be posted. I really didn’t know what to expect, there hadn’t been that many people at the finish line but at the same time I was reminding myself that this was the World Champs and I had to be realistic. When I finally saw the results I was ecstatic, I am not embarrassed to say that I shed a tear. Real men do cry, even those from the north.

I wouldn’t have thought this possible September last year but its nothing to get carried away with, a great platform for a second proper season of racing.