5am alarms are the same the world over. It’s far too early when it goes off, and you stumble around looking for your trisuit in the dark. Then you remember it’s a GB trisuit, and this is the World Duathlon Championships.

Charles Hammond and I were the Optima members of Team GB taking the trip to Ottawa for this year’s event. This featured the usual cast of age group characters, together with Paratriathlon, U23 and Junior Elite races. For some reason the Elite Men & Women’s races had been held as part of the Cali World Games. Ottawa is the federal capital, and not much else these days, although formerly an important trading centre on a key river junction. This makes the city small and easy to navigate, with at least one Canadian flag on (nearly) every building, and great run/bike warm-up facilities along the old canal linking the Ottawa River to the Great Lakes. Nirvana Europe had done their normal efficient job, and we were whisked to a comfortable city hotel. Staff there had been well briefed and watched the parade of odd shaped bike boxes and the subsequent appearance of exotic machinery from hotel rooms without comment.

Air con was essential as the temperatures were hitting 30 C in the days before the race in a more humid atmosphere than London recently – although referred to by the locals as “nothing special…”.

At least this made the 5am start palatable – my race kicked off proceedings at 7.15am Saturday morning, so although bikes had been racked the previous evening, putting on of trisuit, sun block and breakfasting required an early start. Getting to transition by the War Museum, the bike layout looked subtly different. “Oh yes,” said one of the marshals “the stands fell over in the night, but we put them all back….” After enough Argghhhhing to make crew of pirates hoarse, we decided the bikes were OK, so on with the warm-up.

The organiser’s initial idea of running the races through the centre of town had been blocked after the tragedy of the Boston Marathon attack, and they come up with a worthy but rather dull alternative. Imagine closing the A3 from Wisley towards Guilford, running down one carriageway round a traffic cone and back twice for 10km, then biking 20km down the other carriageway, round another traffic cone and back, before finishing with the same 5km loop. Or choose your own dual carriageway – flat/slightly rolling with a stiffish gusty breeze – and you have the picture.

The breeze and the temperature picked up as the day went on so everyone from v50 upwards shuffled gratefully off at 7.15am. Charlie, being a young whippersnapper, was on later… 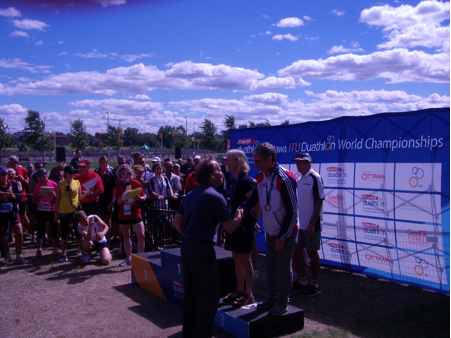 Official results are here – I was overjoyed to find I’d scored a bronze medal after a solid run, a good bike (slightly faster than last year) and a better run – no cramping or energy loss in the last few k’s.

Charlie just missed out, after battling on the bike with his rivals, moving from 4th to 5th in a sprint finish over the last few metres. However he’d like it to be known that he did beat double Olympic rowing gold medallist James Cracknell in his age group by quite a long way…..

Sadly we didn’t see much of Ottawa or Canada, both being rather sad working persons, so after an enjoyable Saturday night with Team GB and supporters and recuperation bike/runs on Sunday it was back aboard the “red eye” Sunday evening for an overnight flight to the UK.

Next year sees another chance to see Canada with the World Tri event further west in Edmonton – start training now!