On April 19th 2015, Rory raced in his first Long distance (2k/80k/16k) triathlon in Cannes and came 12th in a stella field including Jan Frodeno and Sebastian Kienle.

This is his report of the race:

Swim: There was a gun instead of a hooter which caught me off guard. I dived in behind a wall of Pro men searching for clear water. The Age-groupers started a couple seconds after us and already I could feel them tugging on my feet. By the time I found a gap the lead pack had 30m on me which was too much to chase down. I felt a bit dejected and the rest of the swim went by slowly. I swam much of the 2nd lap alone, trying to tell myself I was still in the race. 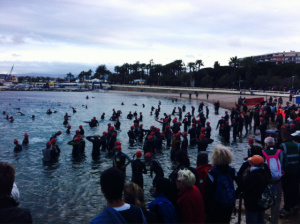 Bike: The first part of the course was along the seafront before heading inland. I set about chasing the athletes in front. 10k into the bike I was jostling position with two other athletes, trying to remember when to eat and what the legal draft distance was. It occurred to me that without a powermeter and on a rolling course I didn’t really have any idea how to pace the bike leg. At that point Sebastian Kienle came steaming past and I decided to follow him. The pace felt hard but manageable. We quickly dropped the other athletes and I felt as if I was back in the race. This lasted for another 10k or so until we reached a technical descent and a car separated us. The next time I saw Sebastian he was 500m up the road!

The course continued to head upwards and I was racing alone again, munching my way through my GU chomps. I tried to gauge my effort on the 10k climb and felt as I was working well but I had no idea where I was position wise. Coming off the top of the climb I knew I was halfway through the bike; unfortunately I was already desperate to start the run! The descent was fairly straightforward at first but became increasingly technical. The last 20k off the bike felt pretty tough and 3 athletes overtook me.

Run: I had a new experience in T2 when volunteers took my bike from me – no racking required in half ironmans 🙂 Also for the first time ever in a triathlon I sat down and put on socks! (While I was cycling I could see blood emerging from my shoe while I was cycling…) The run was a straight out and back along the seafront for 4 laps. I felt good for the 1st k or so and then I began to slow. Unlike Slateman I hadn’t bonked, I was just pretty hammered after the crazy bike course. My feet were burning up and I was starting to cramp but I found a rhythm. Several swigs of coke and red bull later I hit the finish chute in 12th place. 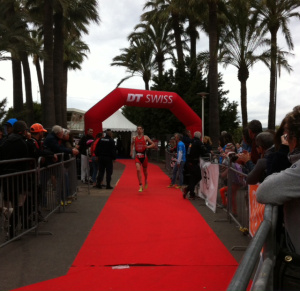 The race was a steep learning curve but a great experience. Despite having a tough day out I enjoyed myself (well for most of it! ) and feel as I have plenty more to offer over this distance. I now know a lot more about what is required for long course racing and will definitely look to do another one at some point.