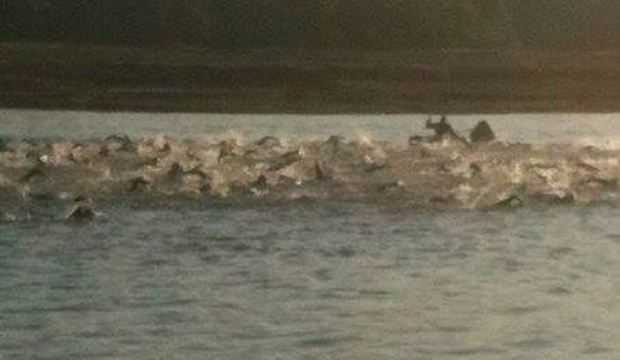 Karina, Anna and I had a great weekend down at Swashbuckler.

First off, a great big thanks to Karina and her parents for putting us up!  It was really pleasant hanging out at their house on Saturday afternoon and evening, though we were all gutted for Gill when we learned about her race.

It became apparent Saturday night that we were all a bit worried about the run for various reasons – Anna with her bruised knee, Karina doing her first long run since her hip surgery, and me with all my normal excuses.  But on the plus side the water was warm enough to do the full swim, and a beautiful day was forecast.

Before we all retired to bed at around 8pm ready for our 4am start we all got our kit ready – Anna helped kariana sort her transition box out as it appeared to have her entire wardrobe in it; after emptying half its contents i think kariana was a little more confident about how her transition was going to work.

We got to bed early, and were out the door at 4:15 am headed for Buckler’s Hard.

When Karina and Anna arrived at Bucklers Hard at 4.45am we all had to laugh at the site of their bikes, hanging off the back the car after speeding through the forest in order to get a good spot in transition – thank goodness they managed to just about stay on.

Anna had a great swim, with the lead out kayak as her guide and was third out of the water.  I took a more round about route, but managed to come out of the water about the same time as Karina I think.  Her bike was still in transition when I got there, but while I struggled getting my bike shirt and arm warmers on it disappeared.  Not to worry, I passed her soon enough, heh heh heh. 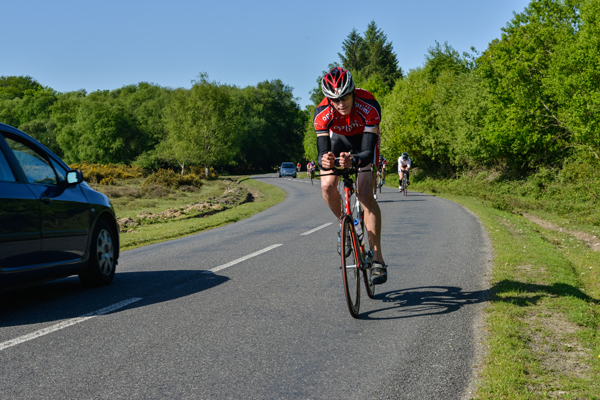 Much later I managed to catch Anna on the bike and came into T2 with about a 5 minute lead on her.  Which she took back in about 2k.  She reported some niggles with her knee, but was determined to see it through after dropping out last year because of the cold.  She ended up finishing 2nd in the F20 category, not bad for feeling less than 100% and came 5th lady overall. (Anna says, ‘I was quite proud of my unexpected performance considering all my injuries lately!’) 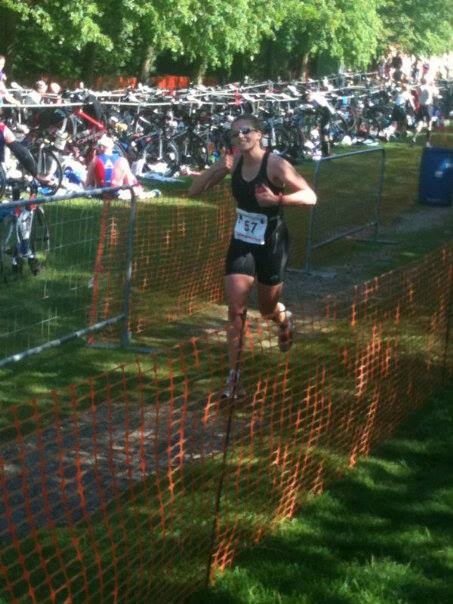 Karina also enjoyed the run, and finished 4th in the F20 category, in her first middle distance race!

For me, this was supposed to be a training session in the build up to IM at the end of the month, so my plan was to take it slow on the run, make sure I didn’t sustain any strains or injuries, and finish feeling strong.  I improved my bike time by 15 minutes over last year, and mostly felt relaxed and comfortable on the run (though after the race I gather I was walking rather funny because of my hip), so mission accomplished.

The finish line for the race is up a hill right by a pub, so I shouted my order and Karina’s father was ready with a lager for me to cap off a beautiful morning!

Written by: Brad Boericke (with additions from Anna).