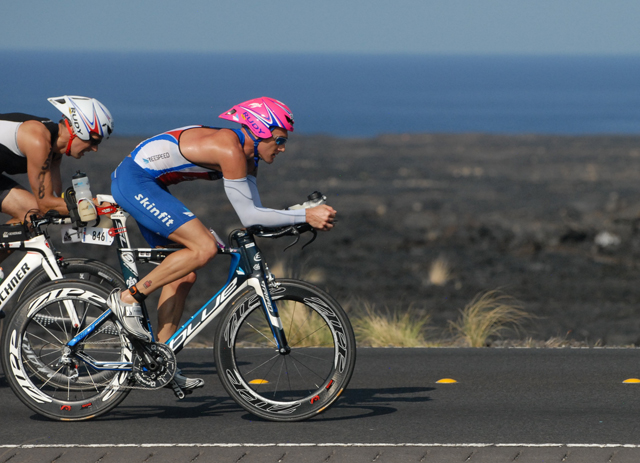 Just before 7 a.m. on Saturday 13 October, I found myself treading water by the pier in Kailua-Kona, waiting for the cannon to fire at the start of my 5th participation in the Ironman World Championships.  Despite a slightly stressful race week, involving three mornings at the bike shop, I felt great and was looking forward to racing in a new (and hopefully slightly slower) age group.  My training had been going well and I was confident that if I raced to my potential I had every chance of making it onto the podium. 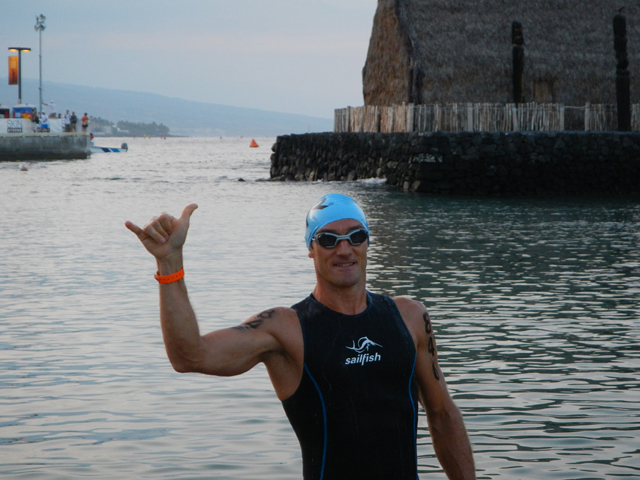 Despite positioning myself more aggressively than ever before, the swim thinned out after a few hundred meters and I found myself with only one set of feet to follow and otherwise in space.  My companion was a very similar speed to me, so there was no point going round him, but I couldn’t find my way over to any faster packs.  So I settled in for an easy swim to the turnaround point where I hoped to pick up some faster feet.  Reaching halfway in 37 minutes, things weren’t looking great (my target was 65 minutes for the swim) and I resolved to be more aggressive on the return leg, finally heading into T2 with just over 69 minutes on the clock.  Not the plan, but not disastrous.

The first part of the bike loops through town and then back out onto the Queen K and it was great to see so many friends on the out and back section up Kuakini Highway.  This is the time to settle down and avoid getting over-excited, before heading out onto the Queen K for the long ride to Hawi and back.  Things felt pretty familiar and the first 40k, with the usual slight tailwind, flattered to deceive.  However, a strong headwind kicked in at around 55k and things looked set for what turned out to be the windiest bike leg I have known in Hawaii.  The early headwind was a clue of what was to come further up the road towards the turnaround at Hawi.  I was enjoying myself though, my legs felt great and things seemed broadly on track, though my heart rate seemed a little high throughout the ride.  I couldn’t work out why this was, but fearing what might happen later in the day if I ignored it, I backed off the power a little to keep my heart rate inside my usual ironman range.  The climb to Hawi was as tough as expected and, despite the exhilarating 80kph descent I realised that this would not be a fast day.  The headwinds kicked in once more on the return along the Queen K and it became a case of ticking off the mile markers and trying to manage the effort correctly to set up a good run.  My legs still felt good and without a heart rate monitor I would undoubtedly have gone harder.

I got back to transition with 5:16 on my bike computer – my slowest ride in Kona since my first race there – but I didn’t think this was too bad given the conditions and I ran round the pier and into the changing tent as quickly as I could, my thoughts firmly on that podium.  In the change tent I sat down, slipped into my Fivefingers (practise paid off here and I reckon it only took me about 20 seconds to get them on), grabbed my cap and number belt and headed out onto the run course.  I was surprised to see Stuart Anderson exiting just ahead of me as I expected him to be 10 minutes or more down the road. Stu told me he had passed out in T2 and had only just persuaded the medics to let him out.  I hit the run course with 6 hours 33 on the race clock and remember thinking that a good run should get me home in around 9:40, which I thought would be roughly what was needed for the podium given the conditions.  The first mile was promising – well under 7 minutes – and felt reasonably loose.   Then, about 2 miles in, everything changed – suddenly I felt hotter than I can ever remember and all I could focus on was getting as much cold liquid down as possible at every aid station.  Thoughts of the podium rapidly went out of the window and it became a battle of survival, walking every aid station (something I have very rarely done in the past) and trying desperately to get my temperature down by drinking as much as possible and shoving ice everywhere I could.  This continued for the next couple of hours, and included a long walk up Palani hill, but from about half way,  my running between aid stations gradually started to flow a little bit more.  I struggled on the uphill section out of the Natural Energy Lab (about 18 miles in to the run), but once back onto the Queen K with 6 or 7 miles to the finish, I started to find some rhythm and also realised that I could still finish in under 10 hours if I could hold it together.  I pushed on as hard as I could and started to pass more and more athletes in the final miles, but when I got to the 25 mile marker and saw 9:53 10 hours appeared to have slipped beyond my grasp.  It was kitchen sink time and I sprinted (a relative term at that stage) back down Palani like a man possessed.  At the bottom of Palani you can hear the finish line, but then agonisingly have to head left and away from it for half a mile, before turning right and right again onto Ali’i Drive for the final few hundred meters to the finish.  Normally turning onto Ali’i Drive is a moment to savour, knowing that the day’s work is pretty much done, but I knew I was within a few seconds of making that 10 hour mark, so I gritted my teeth and gave it everything.  I could hear Mike Reilly calling finishers across the line and, with no finish line in sight, I heard him announce 40 seconds left to 10 hours. I sprinted on, ignoring the crowds in the finish chute and my own advice to enjoy every moment.  And then I was there – I looked round to see 9:59:45 on the race clock and collapsed into the arms of the two volunteers who had rushed up to help me.

In the end the final podium position was 9:39, so my judgment was about right on that, but things just didn’t quite fall into place for me this year.  Looking back at my day, I suspect that I made one of the simplest mistakes there is – not enough water on the bike.  But I was not alone – the run course this year was strewn with broken men (though strangely the women seemed to go as fast as ever).  Some lessons learned as usual and a great experience, made all the more special by seeing so many friends out on the course having various degrees of success and disaster.  Will that be my last Kona?  Watch this space….