Last year’s announcement of a new Ironman in Los Cabos (Baja California, Mexico) grabbed my attention immediately.   A brief visit to Baja in 2005 stands out as one of Lindsay’s and my favourite trips – great food, beautiful desert scenery, diving with hammerhead sharks, white sandy beaches and sparkling blue seas .. you get the picture.  The mid-March race date also fell right in the middle of the whale-watching season and the more I looked into that the more compelling it became.  Baja California in March is a veritable whale Mecca. 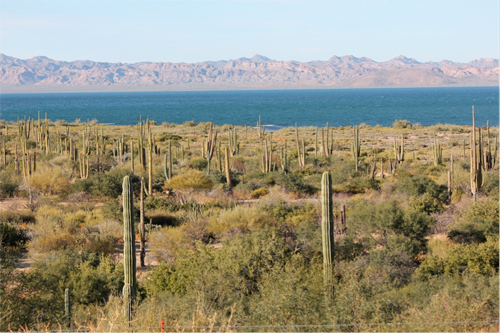 So, soon after returning from Hawaii last October (and despite all thoughts of “retirement”) my entry was in and it was time to start a gentle PR campaign on the home front (not hard in terms of a trip to an exotic location, but slightly trickier to convince Lindsay that throwing an Ironman into the mix wouldn’t be detrimental to its enjoyment).

The venue and timing might have been perfect for a holiday, but the race itself could not have been less suited to my plans for 2013 – to have a good long rest after Hawaii, then focus on shorter races to build strength and speed before returning to Ironman racing in 2014. I’m also habitually a bit of a slow starter every year and struggle to be race fit for early races, so a mid-March race would be a challenge.

I therefore decided to take a “racing for fun” approach to this one – I’d do my best on the day, but would try not to get hung up on targets and goals that I might not be in a position to achieve, nor would I allow training to become all-consuming.   Even with this approach a seemingly endless case of man-flu over Christmas/New Year, some persistent knee niggles (picked up in November’s attempt to run the Thames Path) and a particularly long, cold winter had me thinking about pulling the plug throughout January and February (not that I admitted as much to James B, who’d been trying to talk me out of the whole thing since Christmas).   I was doing less than half the training I would normally do in preparation for an Ironman and race day was approaching…

Anyway, with only one outdoor ride under my belt in 2013, we flew in to San Jose Del Cabo a week before the race and, after a quick trip out to see the humpback whales off Cabo San Lucas 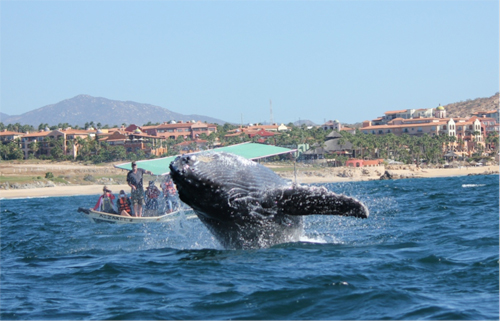 we headed up the coast away from the race venue and set about some serious chilling out.    This was like no race week I’ve experienced before – the sea on the Pacific coast was too dangerous for any real swimming and the single paved road wasn’t somewhere for a lone cyclist to venture out.   I was definitely going to reach the start line well rested. The highlight of the week was a trip up to Bahia Magdalena, a natural nursery for thousands of gray whales, some of which are “friendlies” and behave like water-based puppies, wanting to be scratched and petted by people. 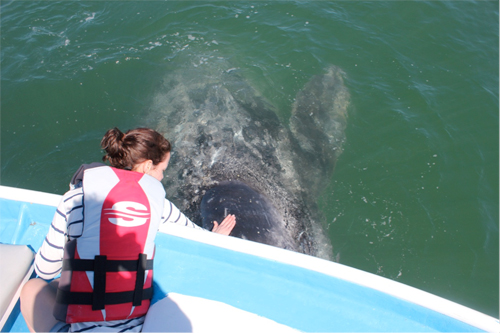 The day kicked off with a one lap wetsuit sea swim (water temp was a pleasant 20 degrees).  The start gun was timed perfectly for those of us in the front few rows to run straight into a breaking wave, but after that the water was relatively smooth.  Apart from a rogue elbow dislodging my goggles at the first turn buoy, the swim was largely uneventful and I exited with 1:04 on my watch; slower than anticipated, but with the Garmin reading 4.2 km either my steering was particularly bad or the course was a little long.

Onto the bike, with a little more sand and grit on my feet than ideal, and after a short steep climb up to the main road it was out onto the two lap course along the coast road between San Jose Del Cabo and Cabo San Lucas and inland towards the airport.   The first 30k to Cabo San Lucas was into a brisk headwind and I found myself working slightly harder than planned to the turnaround and then forgot to back off on the speedy wind-assisted return to San Jose del Cabo (it was fun!).  We then turned inland and uphill towards the airport.  This section of road was entirely closed off, so there was little or no support.  Up to this point I had been making good progress, working my way past quite a few other competitors, but from about 2 hours in it became clear that I had been slightly optimistic about my fitness level and the power started to drop off significantly – I wasn’t being passed, but nor was I making significant gains any more.  The temperature was beginning to rise and felt stifling on the long climb out of town.  Turning for the return leg, it also became clear that the wind had picked up – a lot of recalculations were going on in my head, from initially thinking this would be about a 5 hour 10 ride, I adjusted the estimate first to 5:15, then 5:20 and finally 5:30.  The bike course was hillier (I measured 2400m of climbing), windier and hotter than I had expected – nothing too extreme, but enough to start really grinding you down as the ride progressed and fighting the headwind back down to Cabo San Lucas I found myself struggling mentally and physically.  I pulled myself back together for the final loop out to the airport – the power numbers were unimpressive, but at least I was feeling more positive again – and it was with some relief that I arrived at T2 with 6 hours 40 on the race clock and prepared myself for some Fivefingered fun on the run in my specially adapted new See-ya’s.  I knew that my bike effort had not been the most sensible – 2 hours hard followed by 3.5 hours of steady decline did not bode well for a speedy run – but I felt that I’d kept on top of my nutrition and should still be able to run under 3:20 for a sub-10 hour finish ….  until I started running.

The first few kms were slower than normal, but nothing to worry about – I was sure I’d get into my rhythm soon.   Things only got worse though and it soon became a struggle to hold 5 min/km pace.  The run course consists of three laps around San Jose del Cabo and out to the marina, mostly flat but with a few inclines, including up and over the bridge to the marina.  In theory, the aid stations were about every mile along the course, but in reality most of the course seemed to be one big aid station, which was handy as the heat seemed far more oppressive than in the preceding days (this was confirmed afterwards by spectators) and there was very little shade.   About 3 miles in a nasty cramp stopped me in my tracks as I headed up the short incline onto the bridge and I wondered if this was going to turn in to a very long day.  Fortunately after a bit of stretching I was able to settle back into a steady rhythm and I set about ticking off the miles, getting as much water and ice on board as I could and making sure to go as smoothly as possible at the dead turns and up any inclines to avoid more cramping.

Up to this point I’d had no idea how I was placed, but at around the halfway mark Lindsay told me I was 2nd in my AG but about 15 minutes behind the leader – this was better than I had been hoping and, having quickly concluded that I was in no state to mount a challenge for the win, the rest of the run became a case of holding my position as best I could.  Despite my slow progress, I only noticed 2 people overtaking me, so I guess I should have realised that I wasn’t the only one finding things tough.  In the heat of battle though I was convinced that I must be on the verge of losing places rapidly.  As I entered the finish chute, I had a good look back to make sure there was no one close behind and then enjoyed the run in, crossing the line in 10:09, for 2nd in AG and 50th overall. 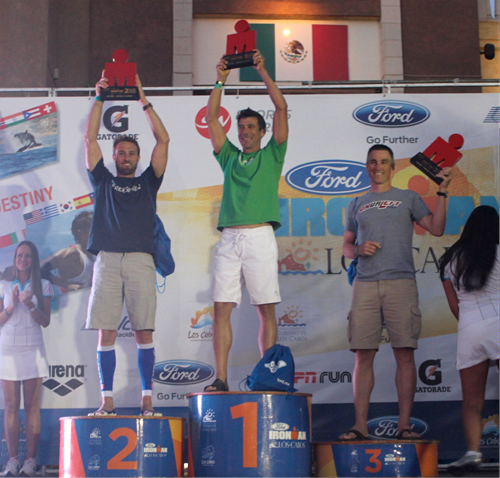 Did I enjoy my day?  To be completely honest, not as much as planned – but that was my own fault for making some pretty obvious pacing errors on the bike and of course not allowing myself to back off.  The race itself was a great success for a first time event – barring a couple of small teething problems everything ran smoothly, the sea was calm, road surfaces were good and the volunteers were abundant and enthusiastic.  Some of the scenery on the bike course was also stunning, though I’m not sure about the sight of vultures circling overhead when your head is already full of irrational chatter in the latter stages of a hot and brutal bike ride.  The result also exceeded my pre-race expectations by a fair margin – maybe the relaxed approach to training and racing is something to be explored further – and I’m definitely a lot fitter heading in to April than I would have been.

Would I recommend this race?  Hell, yeah!  It’s a real destination race, with a tough (and therefore fair) course and a decent number of Kona slots, friendly locals, fabulous beaches and of course those amazing whales.   A great way to escape the British winter for a few weeks, see and do some really cool stuff and sneak in an Ironman. 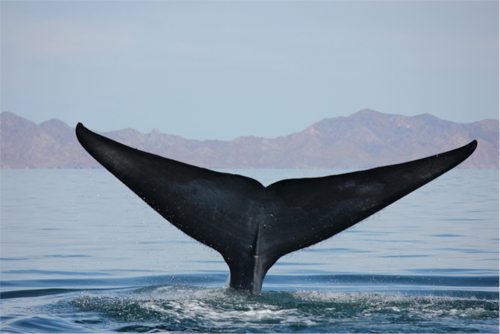