I write up very long, potentially boring and quite personal race reports over on the Black Line London website. Here is the one for South Africa: http://blacklinelondon.com/paul-burton-ironman-south-africa-2015/

But on a briefer and less emotional basis, here’s IMSA 15 as I saw it.

SA was Iron-distance start number 8 for me and 3rd year in a row lining up on Hobie Beach – it really is that great a race that it’s worth coming back to, despite the choice for Ironman races all over the world. It was also my 5th realistic attempt at qualifying for Kona, and having missed out by 1 place at SA in 2013 (with a 9:30 on the old, faster course) and Wales in 2014 the goal was simple – have a solid race and finally stamp the ticket for Hawaii.

My prep had been shorter than normal as the end of 2014 saw me struggling with fatigue and sickness, but once underway I managed to bank some great training, including 2 weeks out in Spain with first Black Line London pal Jane then the Optima full time crew, generally getting my arse kicked. So I turned up a little undercooked fitness wise, but importantly mentally and physically fresh. We had 2 wobbles – losing 10 days running to a calf injury and a spot of food poisoning on Wednesday of race week (maybe just God helping me down to race weight?). Hats off to Coach James for managing my chimp and I through all of that.

The swim and bike went to plan. The swim was hard with lots of swell. 59 minutes got me out 15th in 30-34 AG. The hot, hilly, windy bike was also hard, ensuring most guys blew their legs off while I quietly went about my business. Whilst my power was 10-15 watts down on target I knew I was riding well, the effort felt right and I was in a good position, riding away from those around me in the second lap. 5hr 25 for the bike got me up to 6th at T2, with an expected 8 or 9 slots in my AG.

Whilst everyone talks about fast IM marathons that we could/would/should be running, the truth is that in the 4 previous IMs I’ve raced with a realistic goal of qualifying for Kona, 3:30 would have done the job. Whilst I’m capable of faster, my game plan was to set out at c.3:20 pace (4:45kms) and if it turned out to be a tough day then it would be a long afternoon negotiating with the chimp.

I entered No Man’s Land at 13k. This is something James has prepared me hard for. The euphoria of getting off the bike and starting running wears off. You realize how hot it is, how far is left to go and the gorilla climbs on your back, pulling you back. After covering the first 12k at 4:43 pace it slipped to high-4:50s then a few in the 5’s. The old me would have capitulated. But now I knew to be patient and tackled my No Man’s Land with the mental, fuelling and technique tricks we’ve worked on to minimise the damage . 13k-22k was 5:03 pace, pretty solid for the bad patch, and then I came out the other side and was running 4:50s and felt good once more. Back in the game.

The ambitious/sadistic part of me wanted to kick on in the second half and suffer – but I knew I was 6th or 7th in AG with a buffer behind, so no point rolling the dice. With 5k to go, once over the hill for the last time, I finally opened up and finished with KM splits of 4:31, 4:41, 4:50, 4:36 and 4:31. Running ‘fast’ at the end of an IM is an amazing feeling. I hit the finish chute with what I have imagined for 5 years… a Kona slot in the bag and a clear red carpet with nobody chasing me down. Unashamedly this was show-boat central and a minor dampness in the eyes as I walked across the line. 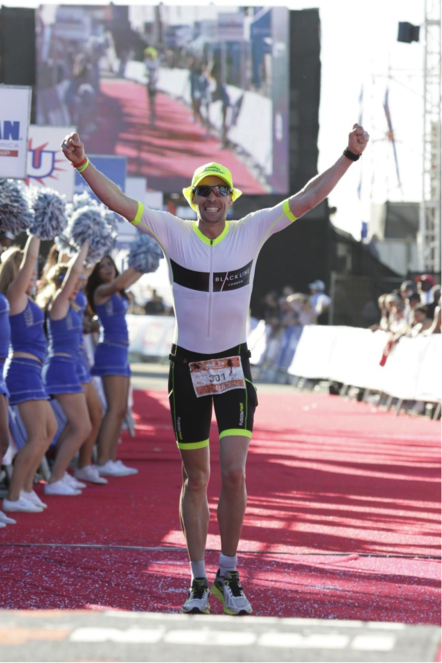 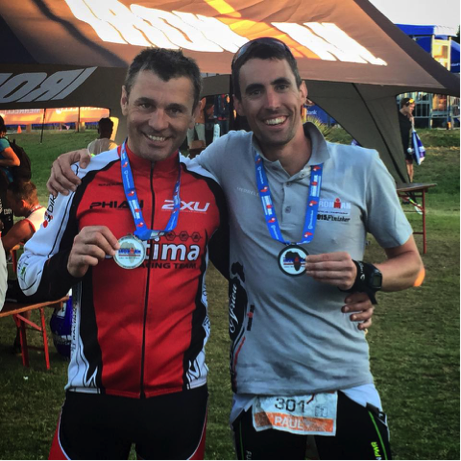 9hr 57min finish was 60th overall, 22nd age grouper, 7th in my age group and it turns out first British age grouper out of a fairly sizeable entry. I qualified for Kona by over 20 minutes in the end and got to collect my lei from Paula Newby-Fraser (8 time Kona winner) with a bunch of friends including James there. Mondays don’t get much better than that. 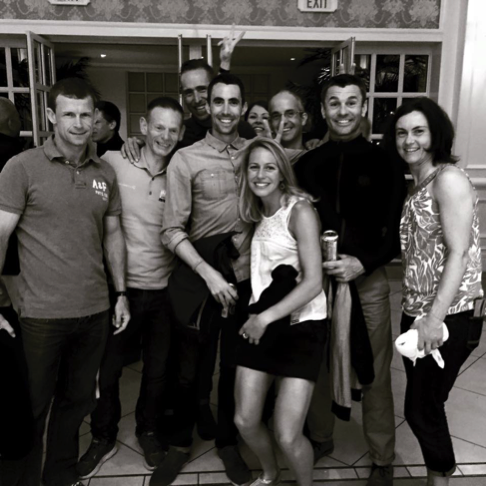 The Black Line London gang… we’ve shared goals and hundreds of hours of training. They are some of my best friends, they have my back and we share adventures. Doing this sport alone is fine, but sharing it is what it’s all about.

Optima Racing Team… the passion and commitment that James leads with is shared by every member of the team. It is a performance environment that is infectious and I thoroughly enjoy being made to feel very ordinary by some exceptional young (and some not so young!) athletes.

Posted in
News
Published
14th May 2015
By
Johnny
Share