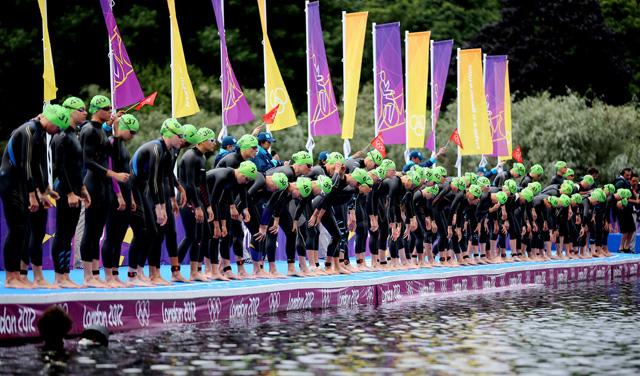 Where on earth do I even start on this one…..

Wow. What an experience. Unbelievable, from start to finish.

On 27 July 2012 my parents arrived in London from South Africa. With them arrived all my kit. Now the kit arrival thing is very exciting and after having heard horror stories about the Beijing kit I was pleasantly surprised at our kit and so very excited and proud to put it all on and wear it around as I would be able to do for 2 weeks! 27 July also meant opening ceremony night and my first night in the Olympic village. Quite a lot of excitement to try and handle all in one day.

So off I went, adorned in my kit, to the village. My first stop, team South Africa HQ. We were situated in the same block as team USA and I was so proud to see the huge and iconic South African flags adorning our part of the village. Next stop, the dining hall. This was a crazy crazy place. Think of almost anything you want to eat under one roof and it was there. Luckily I was only there for the night for the time being. I settled on roast beef and all the trimmings I think, with some fruit salad for desert. It was a long night up ahead so I had to make sure I was fuelled.

Walking into a stadium of 80,000 people cheering was epic, amazing, totally outa this world and surreal – words can’t really describe walking into an Olympic stadium for the first time. The opening ceremony was unbelievable and I’m so glad I got the opportunity to go since my race was only in 8 days time. After that, Richard Murray (my SA teammate) and I went back into the dining hall at 1am for a slice of pizza. I think all the other athletes had the same idea as the place was packed!

I was pretty chilled the week before my race. I really just tried to keep things as normal as possible. I spent most of my time in my usual surroundings. My parents and hubby were around as well, supporting me but not getting in my way (you will be surprised how snappy us athletes can get before we race!). James my coach was there for me 24/7…..he basically put his life on hold for me in the week leading up to the games and he helped me to feel as normal as possible as well as feeding me with all the right positive self talk. I think the mental side to the Olympics is huge. People can tell you it is just another race. Well it is, but it isn’t and more so when you’re in the thick of things. The hype around London was huge, you have media, family and friends joining in and contacting you….and the entire world’s eyes are on the Olympics. It’s not really just another race and to keep yourself mentally ‘there’ is hugely important. I am extremely proud of myself and my coach, family and close friends for handling it so well, I’ve never felt so calm and so prepared for a race, it was awesome.

Don’t get me wrong I was so damn excited too. I just wanted to race!!! So after a couple of days to and from Hyde Park weighing in bikes, race briefings, stripping down some sponsors stuff off our kit, I was all systems go!

I heard the rain coming down while I was lying in bed. All I thought was, I need to deflate my tyres a bit. Then it was off to Hyde Park. Check in. Warm up. Luckily I had James nearby and within access to chat to me a bit and give me what I needed to hear beforehand. I did my swim warmup and then it was time to line up and before I knew it, we were on the pontoon ready to go! I chose spot number 13 to stand on the pontoon. It was the best available number at the time we drew our spots and is also my sister’s lucky number. My sister was the only member of my immediate family who couldn’t be there as she was heavily pregnant.

I had a great swim and found myself in the front pack for the duration of the bike. I just had to make sure I stayed out of trouble as the roads were still wet from the rain. I felt really strong on the bike but my saddle felt funny and I realised afterwards it had dropped by almost 5 centimetres. There were quite a lot of crashes and I was hugely lucky not to come down in the first lap. 3 girls went down in front of me and I must’ve found the tiniest gap to cycle through them and avoid crashing. I set myself up in the perfect position. The crowds were deafening and everything was going amazingly well. I just hoped that I had my run legs! I jumped off the bike and after 1km lost contact with the front girls – I knew then that my run legs weren’t there and I cannot for the life of me fathom why not – the only explanation is my saddle having gone down, putting more strain on my quads. Nevertheless, after an extremely painful run I finished in 19th place out of 55. I gave it my absolute all and I was very pleased but still think I could’ve done better!

The relief of being finished was amazing but also quite sad at the same time, as it was all over. It was definitely the most amazing experience of my sporting career. The crowds and support were unbelievable – I cannot tell you in words how it felt.

It was then time to enjoy the rest of the Olympics, watching some other events and enjoying the Olympic village vibe as well as eating as much crap as humanly possible and making up for any lost wine consumption time from the past 2 years.

It all finished off with the closing ceremony which was also pretty darn amazing. My sister gave birth on the day of the closing ceremony to a beautiful little girl and when I walked out of the ceremony and into the underground when I saw a sign pointing to ‘Rio 2016’…..these 2 things made me think to myself that for every ending there is a  fresh, new beginning…I felt really peaceful! 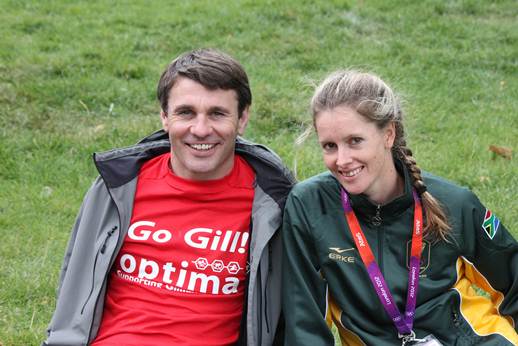 I want to thank my husband Mark, my family, my coach James, my friends and my teammates for the amazing support leading into the games. A huge thank you too to my sponsors and other supporters – Phian bikes and wheels, Optima Racing Team, Oakley Europe, Zone 3 wetsuits UK, Nike South Africa, Triathlon South Africa, & Bikelab Richmond bike shop, you have all been awesome and instrumental in getting me to the games. Behind every successful athlete is a great team of people and supporters and I’ve been so fortunate to have such amazing support!

It’s taking a bit of time to get rid of the Olympic hangover. I was in a semi depressed state but my motivation to train has returned. I know I have not hit my potential as an athlete and that keeps driving me forward every day – to be the best that I can be!