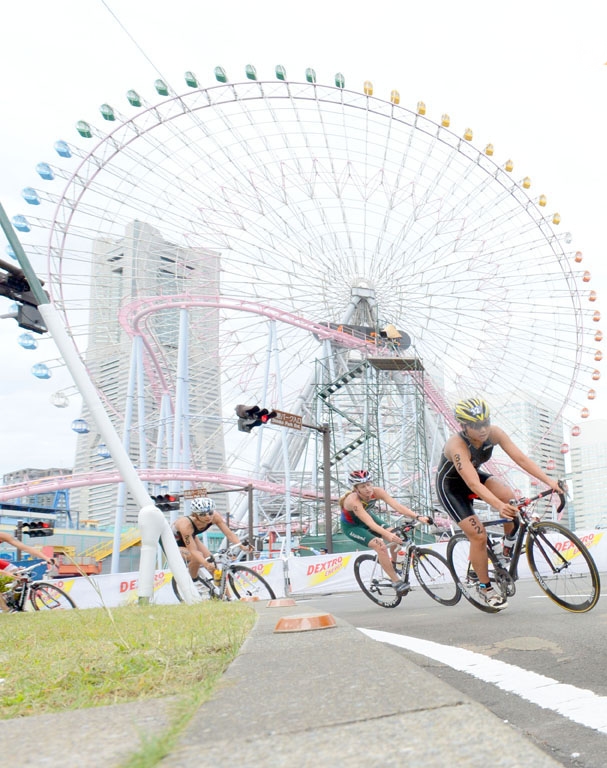 I flew out to Japan on a Wednesday afternoon, arriving Thursday, to race Saturday – cutting it a bit fine! When I arrived it was howling a gale and news on the street was that a typhoon would be passing through the next few days. Great for triathlon racing. I felt too much like a zombie to do anything at all on the Thursday I arrived, except of course eat and have a sleep. I then tried riding over to the host hotel for the briefing and nearly got blown off my bike so had to stop. I lifted my bike up to walk on the pavement and my bike went horizontal! It was a bit scary! After race briefing we enjoyed a lovely welcome dinner put on by the Japanese Triathlon Union and dignatories. On Friday I managed to wake up after 11 hours sleep. I felt totally destroyed but knew I had one day to race so better do something. So off I went for my usual pre race day run and drills. I felt awful – what was I thinking arriving in Japan so late! The swim recce was cancelled as the harbour was still enjoying typhoon waves so I cycled part of the course and then cycled to the little school pool for my swim and then back again. I felt awful and heavy once again, oh dear. How to cheer oneself up – eat the local cuisine! I love racing in Japan and I love the food. The people are the warmest, friendliest people you will find anywhere and it is such a pleasure visiting this country. So I treated myself so some pork katsu curry. If you haven’t eaten katsu curry, you are missing out, it is delicious.

I had a little snooze in the afternoon and then all that remained was to get my race stuff ready, eat some more and get to bed. I managed to rip the valve off my one wheel whilst pumping it up which was a great thing to do the night before the race. Luckily it stayed up – sealant to the rescue once again! I then realised the fatal error of the afternoon snooze. I could not sleep. I lay there and lay there. I tried counting sheep, then I tried counting Japanese people, then I tried counting Japanese sheep – none of it worked. I think I had about 2 hours sleep and woke up feeling totally shattered again. Race day! All I could think was man, let this damn race be over so that I can sleep.Luckily I woke up a bit and my body felt remarkably better than the preceding 2 days. I was relieved to hear that I was not the only one who hadn’t slept very much either, there were some very rough looking faces in the athletes lounge!

I had a shocker of a swim. I think I was last off the pontoon. I honestly just felt a bit sleepy really. The swim felt slow and I felt that I got stuck behind some slower swimmers. Luckily we had some strong cyclists in our group and were able to catch the front pack on the 3rd lap. It was then a matter of sitting in and conserving energy. I felt a bit sleepy on the bike too and had to concentrate quite hard as I kept thinking, ‘it’s 2am in the uk right now.’ I had a bit of a slow t2, coming in towards the back but then things started to look up. I had my run legs, yes! The run legs that had deprived me at the Olympics were back, yay! I moved my way through the field nicely on the 1st lap and then held on to take 10th spot. It hurt a lot and was my first top 10 result finish in a quality field, only really void of Olympic champion Nicola Spirig and injured Helen Jenkins. All the other big players were all there and I can be very proud to finally have achieved a top 10. My prep was far from ideal. I had felt awful in the lead up and was suffering a bit from a cold from a suppressed immune system after my hard training block. It just goes to show that you should never give up, no matter how you feel as things often turn around for the better. At least I also now know that I can operate on little sleep if this ever happens again.

I spent the rest of the day enjoying the now beautiful, calm, sunny weather, watching the men race and then taking a walk around the city in the sun. I again treated myself to a massive lunch of katsu curry. The Japanese triathlon union then put on a wonderful dinner for us post race with awesome, yummy Japanese food. A great end to a great day! It was then pack bike time and sleep time as I had to be up early Sunday morning for my flight back to London. I managed to squeeze in a beautiful morning run while the sun was rising, enjoying my last bit of warm weather before it was back to chilly, rainy London.