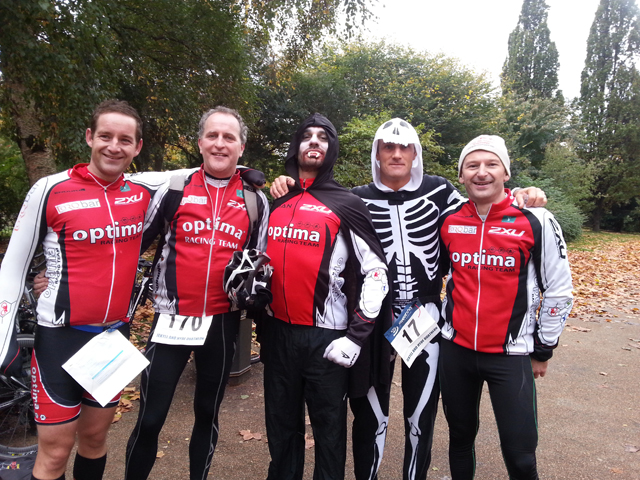 With victory in the London League already secured, the season-ending Jekyll & Hyde Duathlon in Hyde Park was a chance for the team to have a bit of fun and work up an appetite for a long pub lunch. Though, having been side-lined by injury for the Summer, this was to be Charlie’s only hit out for 2012 and Rory also had his eye on the individual win.

There was some super-quick racing at the pointy end of things (with the winner, Danny Russell, averaging 3 mins/km on both runs), but unfortunately Rory punctured early in the bike leg and was forced to pull out (though he still insisted on pacing Tim round the second run – something Tim wasn’t altogether happy about, with his skeleton “onesie” proving not to have the best cooling properties). Charlie had a very solid return to racing with 13th overall– not back to full speed yet, but impressive on such a low training base.

As for the rest of the team… let’s just say it was a good thing we didn’t need to win this one. The nine hour lunch that followed closed out the 2012 season in style.