I booked the Huntsman 70.3 in New Forest early in the season to have something to aim for during the winter months. Being in the UK, you know the weather is hit and miss but who would have thought the 23rd of May would have felt like a bad day in November?! 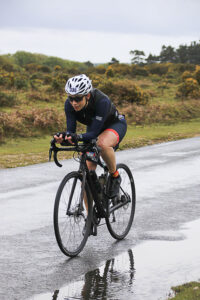 We checked the weather forecast one last time before leaving the hotel in the morning. ‘No rain on the bike’ meant the rain jacket would stay in the bag, this must be accurate enough by now. And yet the first droplets started while setting up transition. ‘Must be just a small cloud’ I thought and stack to my plan, laying out my short-sleeve jersey to layer on top of the trisuit. It was chilly!

After doing our usual warm-up with James, Libbs and Ewan, we headed down to the lake. 13.9 degrees- just about less than 14 but they didn’t shorten it. ‘No acclimatisation!’ shouted Liz, my friend doing the standard distance, on her way out of the lake. ‘You go straight in!’ Here we go… I’ll just take it easy for the first few strokes, just until the face has adjusted to the cold. It was hard to resist going fast after the others going in ahead of me, literally on a sprint! But blowing up at the early part of the swim was one of my fears so I knew if I built it slowly I would be able to hit my pace for the majority of the duration. It actually felt great, 10’ in I had warmed up and nor feet or hands were freezing. ‘This is going to be good’ I thought, and concentrated on reaching one buoy at a time. ‘Wait, is that rain already?’

I was out before I knew it and put my shoes on. Bringing them along to the lake turned out to be a good decision as I was able to run comfortably the 400m (!) of partially carpeted path to T1. In fact, it served well to warm up feet and hands after the cold swim!

When I saw James and Ewan at T1 I knew my swim time must have been ok, good start! Of course I arrived to find everything soaked so I started digging out other layers form my bag. It would have to be a long jersey and a gilet. Gloves too, it’s so cold! Socks were thankfully still dry but not for long. First steps into the dreaded run holding the bike were on wet grass and avoiding paddles! It didn’t matter, adrenaline was taking care of everything. ‘Just don’t get hit by a car as you come out on the road to mount’, I focused, and I was off.

It wasn’t long until I realised this would be a fight against the elements more than anything else. It was literally pouring with rain.

I suppose I was so focused on fighting the downpour while at some point it dawned on me that I hadn’t seen any other rider for a while… The route seemed unfamiliar too (some of us had done a course recce about a month before) which got me worried. Was I lost?! In panic, I stopped a driver overtaking me, telling him I was lost and I was doing ‘that race’… I must have sounded so silly and obviously he couldn’t help. For a few seconds I thought that was my race done as the first urge was to take out my phone which was obviously not there. Some unresolved issues with my Garmin the month prior to the race meant I hadn’t loaded the route as the navigation wasn’t really working. Thankfully it was still saved so a first glance gave me an appreciation of how far off I had gone: Very! I immediately turned around and tried to cover ground as quickly as possible, fighting the thoughts of how silly I had been to miss a turn (turned out it was a double one and only the first was marshalled) and grieving for the additional ~25’ added to my time. ‘Just focus and get back to it. And no mistakes in nutrition now, discipline’.

I pushed through, making desperate calculations and trying to work out the break-down of the remainder as my whole plan was out of the window. At the end of the first big loop I was so relieved to see my husband cheering me while I shouted to him that I had made a mistake on the course. I was so late! One more small loop…

Despite what happened, one of the best moments on the bike was the actual realisation that I was hitting my target power at the right amount of effort, something unimaginable just weeks before when only practiced on intervals. James had explained it so well, how the fitness comes out when you’ve done the training and freshened up before a race. I was literally looking at my legs being in awe of what they were doing for me. It was such a great feeling to hold onto to gain confidence in the future.

With about 10 additional kilometres, the bike felt really long but it did come to an end eventually. Two out of three done and I was happy at that point, no matter what would happen on the run. A sudden injury that threw me out for 7 weeks back in March had meant I wouldn’t really be ready for this run. It would be one step at a time and a couple of walk breaks to ensure I don’t end up injured after the race. So a good swim and bike had already won me the day!

I could feel my numb feet as I was taking off my shoes preparing to dismount. Again, that run back to T2, I just had to be extra careful. Not that I would feel anything if I stepped on something at that point.

I offloaded the empty gels out of my trisuit and put shoes on. ‘Easy now, take your time to get into it’. On the way out I saw James coaching me to keep my cadence high and not go off too fast as it was a long way to go. How cool was it to have my coach there?!

After a few minutes I was actually feeling my legs strong and started being so happy with every step. Was this happening for me? Maybe I would get to finish this? I just had to watch my steps and not force my tendon to overwork that could throw it off and mean the end. Particularly up and down the hilly trail bit. 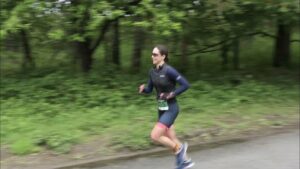 On the way back from the first loop and as I was appreciating the cheers from locals and other competitors, I realised I was running at the same pace with another lady; we actually started chatting! The pace was not as relaxed as it sounds but I was happy I was able to hold a conversation! It was her first 70.3 as well and as special as the encounter was, we promised each other that we wouldn’t let each other quit. We actually ran about 7K together which was refreshing and encouraging.

With about 5K to go, it started hitting me that I was ACTUALLY going to finish. And I was going to finish strong and having enjoyed every single moment of the race. All the difficulties I had been through were now floating in my mind, making me appreciate all the more what was happening. It was not a given at all.

I cannot describe the joy of hearing James, Libbs and Ewan cheering me close to the finish line, it was one of the best moments. I actually got emotional and shouted, ‘I love you guys!’. As soon as I passed my husband with the finish line in sight, I had the biggest smile ever. This was a true gift. The longest run I had ever done, off the bike and in these conditions, was the one that brought me to the end of my perfect, first 70.3.