First 70.3 race of the season for the team was the Huntsman middle distance race in the New Forest. Six of the team raced in tough conditions. Water temp was confirmed at 13.9 C in the Ellingham water sports lake. A full 1900m swim meant there were some cold bodies dragging themselves out of the lake by the end. Libs Matthews, one of our elite athletes, was the first lady and third overall out of the water with the rest of the team not far behind. 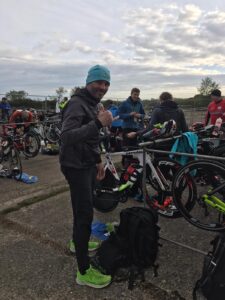 After a pleasant, if not freezing swim, the rain began to fall hard. A 400m barefoot run to T1 was the next obstacle. All was going well until the soft matting abruptly ended and a gravelly tarmac hell opened up. Running across hot coals sprinkled with lego would have been easier. Nevertheless the team managed to transition at varying paces with Vesta already battling hypothermia. Vesta set an unofficial club record for slowest transition taking 8 mins 45 secs, just pipping Steve at 8:10.

The rain continued through the first 30 mins of the bike making the bumpy, slippery New Forest roads treacherous. After throwing (literally and metaphorically) his 3 bottles all over the road Ewan, our Club Sec, managed to keep it together for the rest of the bike. Christina after making good headway early, unfortunately missed a turn adding 10km to her race. Coach James is adding navigation to the upcoming sessions. The rain slowed in the second half of the bike, but the wind gusting at 30mph up on the downs made the going hard.

T2 welcomed the team back with the barefoot gravel lego hell. Steve was really getting into his stride now and smashed his previous transition record taking 12 mins in T2. On the to the run, Libs went out like the clappers running some very strong early times and impressing the fans. This abruptly ended with the wheels coming off around the 14km mark. She is now fully committed to short course racing. Christina chatted her way through the first 10km, taking coach James’s advice on pacing and holding a conversation very seriously. Coach James finished with a strong run despite having peddled 60% of the bike with just his right leg. Vesta had a good run, finally having warmed up post the swim. Steve clocked off the first 13km well, but the tough day caught up making the last km’s tough.

A great day out for the team with Christina conquering her first 70.3, Libs coming in 2nd female and Ewan 6th male. Plenty to work on, but great to be back out there racing as a team. A big thanks to the Challenging Events team who put on the race in the trying conditions and amid a pandemic. 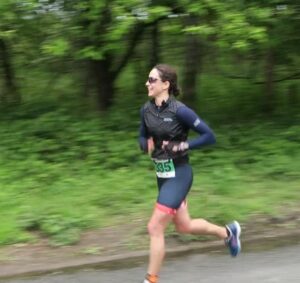 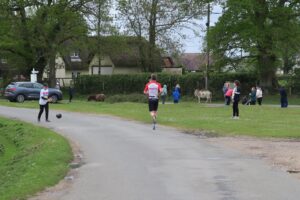