If you were to pick a year for your first tri, most certainly you wouldn’t pick 2020… or would you?

Well this was the year for me anyway. 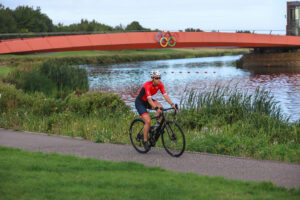 I ventured in the world of triathlon exactly one year ago, in September 2019 when, during a holiday in the Greek islands, my husband made fun of me not being able to swim freestyle with my head under the water. Me being me, I hated there being something I couldn’t do, so upon return to the UK I paid for 5 swimming lessons at my local gym.
About a month after I met James, started training with Optima squad (intense!) and by December, I had a whole race season planned (ambitious!). A-race: IM 70.3 Zell-Am-See in Austria end of August; a Sprint in May and an Olympic with ocean swim in July for the build-up. Little did I know a little virus had different plans…

Fast forward into August and with all my races cancelled by then, I grabbed the opportunity and signed up for one of the first ‘COVID-secure’ events that came out, only a week before my planned holiday / end of ‘season’.
Since I had spent most of the year with the half distance in mind, I selected the Olympic as the next closer to test myself. It was about only 5 weeks out that I started cutting the distance and increasing the intensity to somewhat suit this race. But as a first one, the goal was simply to finish and have fun doing it!

We arrived early as I wanted to get transition set up and have some time to relax, warm up and get ready. But no; due to the restrictions, it was all one way so as soon as you left the car park there was no coming back, you were ready to race. No backwards and forwards, no trip back to the toilet, no warm-up. All had to be done before and then off you went! I had somewhat anticipated that and didn’t let it get to me as a change of plan.
As my fellow competitors arrived at the car park the trend was clear: TT bikes (non-drafting race) and some seriously fit-looking people. I literally couldn’t see anyone that I could eyeball ‘at my level’. It looked like there were many long-distance athletes with their races cancelled, thirsty to race. And where were all the ladies?! I smiled.
I kissed Ale goodbye feeling a small wave of anxiety as, not only was he not allowed to the transition area, but not even allowed to come and see and cheer me. So that was it; I was doing this, and I was only going to see him afterwards. I was alone from that point on.

Due to the restrictions, the race had a time trial, non-drafting format where we were given a 30’ window to start. So we got ready, queued and each swimmer entered the lake at 15” intervals. A rather soft start compared to the normal mass starts which perfectly suited my level and easily brought me into my ‘zone’ without any panic attacks (which were my biggest worry throughout the year!). Not only due to blowing up by going too fast and getting out of breath but also due to the sight underneath me: Dark, ‘ominous’ weed… a fear I was carrying since childhood and thought to be my biggest hurdle in triathlon. This is where 2020 was ideal for me as, with the pools closed, I did so much open water swimming that by now I was so used to it that it felt like nothing! The water was cool and clear and it felt refreshing. Two loops of the rectangular course meant straight lines although I did catch myself zik-zaking a few times! A good exit via a ramp and a few kind people smiling at me, I smiled back. Swim done and the stopwatch on my optimistic end!

T1 was funny as, again, due to restrictions there was a one way system to be followed so even though my bike was next to the exit I had to run all around until I got to the infamous mounting line and with James’s ‘double hop’ my flying mount was done and I was off! Even if everything were to go wrong after this at least I had done that, I was proud!

Bike course was 8 flat loops of 5K, already broken into manageable chunks for us. From the first moment I could feel my lungs working and I thought ‘Oh God, is this it for the next couple of hours already?! Triathlon is TOUGH!’. I was committed to staying in the moment and not let my thoughts get to me. I started looking around and taking in the landscape. The first half of the loop was through beautiful woodland adjacent to the lake while the return was a strip of road spreading between the two lakes going through a few small bridges here and there. There were a lot of geese and their poo and feathers spread along the course which I thought was funny.

By the fourth loop I remember feeling great and really enjoying myself. The next moment and as I passed over a rougher patch of tarmac, I was convinced I had a flat tyre and spent a few minutes looking down to check. It was only last minute before the start that I had decided to drop my repair kit to save some weight, seeing that no one else was carrying it, could I have been THAT unlucky?! But it was all in my head so I carried on. I was, of course being lapped by some spectacular athletes that I couldn’t begin to comprehend how fast they were going without blowing up. I was envious of their position on their TTs that looked like they were resting their upper body. As time went by, participants from the sprint event joined in so some more ‘normal people’ like me turned up on the course. ‘Ah so everyone is doing the sprint!’

Last loop and I started easing off a little bit, getting ready for that run. ‘Just dismount BEFORE the line’, I told myself as I took my shoes off while on the move and before I knew it I was off, next to a kind marshal pointing me to ‘stick to the left’ as bikes were charging past right behind me.

I had heard a lot about the first 2K of the run being the most difficult part of a triathlon. My strategy was to not go off too fast as I tend to off the bike and pick up the pace later. I felt tired and this is where I thought again ‘triathlon is TOUGH’. The only thing I could focus on was a ‘quick turnover of the legs’ as James had said, and not think about pace. Soon enough I had finished the first of four laps and something was wrong. For 10K over four laps my watch should be showing something around 2.5K but it looked kind of short! I know my maths skills greatly degrade during runs but that was simple enough. Was this a joke? What if there are 5 laps? But then that’s more than 10K and I remember the instructions were clear, it said 4 laps for Olympic distance. Soon enough I could see everyone checking their watches, looking as troubled as I was. ‘OK, not just me then’. I tried to check with the marshal on the run but she was equally troubled. ‘I think it’s 4 laps, yes!’. Oh well, better focus on the task at hand. I was unable to pick up the pace as I had wished. The legs just lacked the springiness of my last few training runs that had made me hopeful for a better time. ‘Just don’t slow down too much’. The distance uncertainty did not allow for a final push, as I was worried there could be more course left around the back to the finish line that I wasn’t able to see. So before I knew it, there it was, at the random 8.8K mark, the finish line; I had done it!

I picked up my own medal in a plastic bag, together with some crisps. I kept looking over the car park to glance Ale, but I couldn’t see him. I guess I finished earlier than I thought with the shorter course! I caught my breath double-checking with others and everyone’s watches were showing the same. What a fluke- it felt like cheating, but we all admitted we were happy with the ‘discount’ at that point! After all, we had raced in 2020!