Never in a million years did I think I would be able to compete in a triathlon. Yet, I sit here typing, about to retell my experience of a super sprint as a first timer and complete novice! 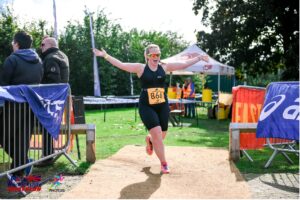 Growing up, my Aunty and Uncle in Western Australia would regularly compete in triathlons. I had no idea what they were or what they entailed. I watched a triathlon for the first time in 2010, when my Uncle competed in an Olympic Triathlon at Shells beach in WA. Over the years since then, I ran occasionally and participated in some spin classes at the gym, but that was the extent of my ‘athletic’ career.

Exactly one year ago, in October 2020, I woke up one morning, looked at my partner and said ‘I want to do a triathlon!’ From there, I spoke to my Uncle and Aunty and they recommended the first thing to do was join a triathlon club… Cue Optima Racing Team. I remember, I was SO nervous to turn up to my first training session that I was almost sick in the car over Kew Bridge. What was I thinking? How could I think it was even possible to do a triathlon as someone who hadn’t ridden a bike in more than 15 years, hadn’t swam since primary school and who hadn’t even ran for longer than 4km? I felt like an imposter. Nevertheless, I showed up and had a wonderful first training session – training along side some incredible athletes, Ironmen and Women, marathoners and Olympians. They were so friendly and unbelievably encouraging 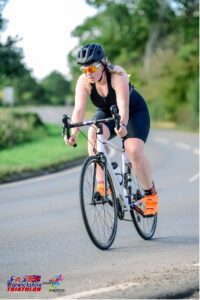 . Maybe I could do this?

I attended two running sessions, then we were straight back into lockdown for the majority of November. Training sessions were a logistical nightmare to be done safely and within the restrictions so majority of sessions were moved online or for you to do independently – of which I lacked a lot of motivation but tried to keep up with regular cycling and running.

In April, training sessions returned and I joined the running and cycling sessions. It was a while before I bit the bullet and joined a swim session. Thankfully I did, because despite being a ‘good’ swimmer growing up and reaching regional and state swimming competitions, I was nothing compared to a triathlete swimming and had to relearn the basics of how to swim! Who knew that swimming could be so technical.

I felt like I wasn’t ready and was terrified of entering a triathlon. However, after speaking with a fellow friend at Optima, she encouraged me to go for it before the end of the season, otherwise I will think about it all over winter…. So I did. October 3rd, I swam, cycled and ran my way through a super sprint course in Stratford Upon Avon. I wasn’t really nervous or scared, like I thought I would be. I just said to my fiancé ‘I am going to have fun’, and I did! I smiled the entire way through! I cheered and clapped my fellow competitors on, just like my Optima friends do to me. 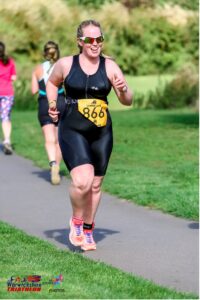 The swim was only 200m in a 33 m pool so 6 laps and I was running towards transition. My fiancé said he could only stay and watch for 30 seconds and then he had to run to transition to meet me. First transition wasn’t as smooth as I had practiced (dang socks!) but I mounted the bike how James had taught us back in Spring. I was nervous to be biking on the road, especially in such a busy, tourist town, but I navigated around the cars successfully and tried to remain calm. In the end, I had practised for months and knew what I was doing. I remember climbing a steep hill, about the 11-12km mark and passed 5 competitors.  I thought to my self ‘Thank GOD I did all those table top sessions in Richmond Park’. My second transition was so much better! I think by this point I was having too much fun so everything just fell into place. I don’t enjoy running but time seemed to go so fast and before I knew it, I was almost at the finish line having almost beat my time for 2.5km!

When I crossed the finished line, I didn’t feel tired or sore or exhausted, but rather exhilarated and more determined and eager to do another one than ever! The first thing I said was ‘So when’s the next one?’ My fiancé just shook his head and said ‘Why did you wait so long to do one anyway?’ I am so proud of myself. This is the first time I have ever set my self a goal and achieved it! It means so much more to me than a medal or doing a triathlon (which is what I set out to do in the first place). Its an experience to prove that no matter whether you’re a complete novice, first timer, Ironman, athlete or Olympian, nothing is impossible!