With the winter fast approaching in the UK, some of our women have been chasing the sun in some late season 70.3 racing. All had stellar performances and you can read a bit about each race below to see how they got on!

For the last 70.3 of the season Libs headed out to the beautiful location of Challenge Mallorca. Having picked up a dreaded cold a couple of days before Libs was unsure if she would even be able to race but decided to give it a go! It’s a good job she did as she finished first age grouper overall and 12th out of the 20 strong pro field of women. A good sea swim in crystal clear waters all be it a little choppier on race day than the week leading up to it. A hilly technical 2 loop bike course meant you really had to stay focused! And a undulating 4 loop run with 5 dead turns on every loop!! A tough day out where she had to dig deep on the run to get it done but lots of lessons learnt and a good way to end the 70.3 season! 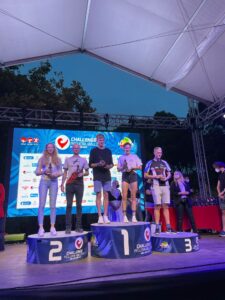 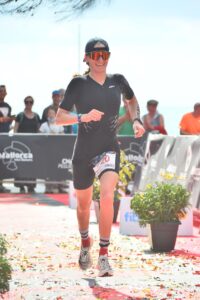 After a long season Christina took it to home soil for her second take on 70.3, at Costa Navarino in Greece. Apart from being special for obvious reasons, it came with a great result too, finishing second in her AG and 6th female.
The conditions were perfect and the swim was a real dream in the transparent waters of the Ionian Sea. Onto the bike, things got tough early on with a 10K long climb to be repeated twice, which pretty much defined everyone’s race. She stayed in control but felt the effect on the legs throughout the rest of the bike and the run which was not going to get any easier. With ~200m elevation on rolling hills, it was hard to get in a rhythm and it was all about staying focused, going by feel and not slowing down too much. The circular route helped with passionate supporters all around, and of course, coach JB and teammate Ollie waiting at the finish line. Nothing better than racing with friends and supporting each other!
“I couldn’t be happier with this result after so much hard work done during the year, I absolutely gave it all and learnt what a tough course means. Loads to work on this winter!”
Costa Navarino IM 70.3, 5:18 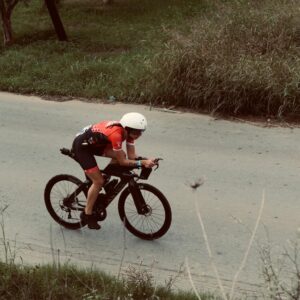 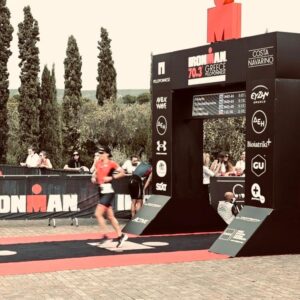 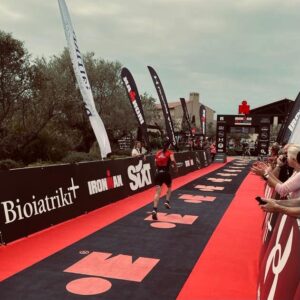 On Sat 9th October I raced Lanzarote 70.3 with the goal of getting on the podium and getting World  70.3 Championships slot in Utah next year.

The swim is always my strength (was slightly long and a bit wavy!), however I was second female out and first in age group. The bike I found tough, basically 5 climbs and 5 descents. Unfortunately my legs didn’t turn up (probably menstrual cycle related!), and two girls in my age group over took me.

Into T2 and two bikes and was told I was 6 mins down on 2nd. I knew needed to run fairly consistent to stay in 3rd position or have a chance of catching 2nd. 4 laps on the run and with 1 lap to go I was just 30s behind, I had fuelled the race pretty well (80g/hour) and had some legs left for the last lap. I overtook 2nd without about 4km to go and managed to put 2 mins into her. The run was over 1km long, up and down, hot and windy!

What a race! Brutal and not quick by any means. Even the pro women were finishing over 5 hours. Great location though, would highly recommend if you like a tough course! 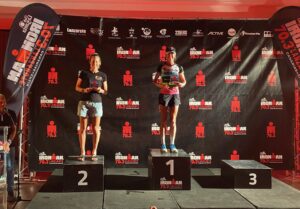 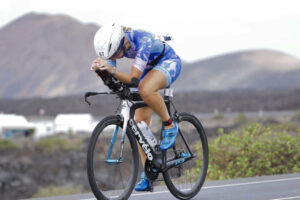