Back at the start of 2021 and after 10+ years of playing football, I set myself the challenge of completing an Ironman after reading John McAvoy’s “From Iron Bars to Ironman”. In July of last year (2021), after 6 months of training on my own, I completed Ironman UK in Bolton and in doing so qualified for the Ironman World Championships. The qualification was unexpected and I’d always thought that I’d do one Ironman and I’d be done but following about 10 seconds of turning it over, I decided to take the opportunity as, to my mind, you don’t turn down opportunities to race in Hawaii with the best athletes in the world as it won’t happen every day! 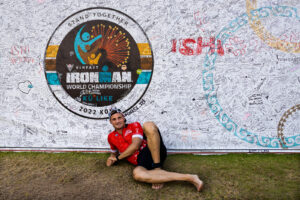 In the period after the race and having taken the decision to race Kona, I was put in contact with James as I was keen to pick his brains on Kona and also a bona fide training plan in preparation. The week after our initial chat, I jumped in the pool with the Optima team and promptly had it reinforced that there was work to do on my swim (and a lot of it!). What was initially meant to be a month or two of training with the team before the race in October of that year, has turned into much much more as the race was postponed a year and I continued my journey with Optima and James for the last 18 months.

Over the course of that period, I competed at Ironman 70.3 Costa Navarino, some XC races and smaller triathlons, Ironman Nice and then, ultimately, the Ironman World Championships in Kona, Hawaii. Although I could write an essay on each one of those and a dissertation on the training/fun I’ve had with the Optima Racing Team throughout that period, I’ve been asked to concentrate on Kona and the build up thereto which is what I’ll do!

Coming off the back of Ironman Nice in June which was a race that reinforced the great strides I’d made in triathlon since working with James, I knew the build to Kona would be tough as I’d have to balance the fatigue (I found it more mental than physical to be honest) of having just completed an Ironman with wanting to put together a very solid 12 week block of training in which I wanted to continue to make improvements. Ultimately, both mind and body recovered well though and the biggest issue was fitting the consistent and demanding training regime around my work commitments. These peaked in August and for two weeks, training (and, more harmfully, sleep) suffered considerably. As for many “age-group” athletes, the clash between work commitments and consistent high volume training challenged me over the course of my Ironman training. It was not uncommon for me to do 60+ hour working weeks and so fitting in the sessions could be difficult but, with James’s help, we found a way. My advice to any people setting out on the “Ironman” journey is (1) a training plan is an absolute must – it takes the “thinking” out of it and instead, especially when you’re tired, you just have to look at the session and then execute (easier said than done sometimes I know!), (2) 9 times out of 10, you can make it work if you really want to – 5.30am wake ups and logging back on after a tough track session are difficult of course, but come race day all those tough moments are banked and you’ll be better equipped for when it gets hard out there; and (3) do cut yourself some slack when you need though – there will be days you will be tired and will have to push through, but with a coach’s help you can identify those days where it is better to sleep in, make the session an easy one or reduce the number of reps – don’t be afraid to lose the battle, but win the war!

Getting back “on plan” after my two week “blip” was really hard as the body and mind were tired (and probably needed total rest) but in my mind I was thinking that I’d missed two weeks good training and Kona was starting to loom large! With James’s help (and a week completely offline training in France), I navigated through that period and come the end of the August I was happy that if I put in a solid month of training in September I would travel to the Big Island in good shape which is ultimately what I did.

I flew out to Hawaii just under two weeks before the race to give myself the best chance to acclimatize to the stifling heat/humidity (as well as to enjoy the sights and sounds of the beautiful island!), joining two other Optima members who were racing too, Stu and Jess. Having a little group of us to train and chill out with pre-race was absolutely epic! Stu is a Kona veteran (9 times now!!!) and was a brilliant tour guide who imparted many a pearl of wisdom over those two weeks that helped me on race day whilst Jess, a first timer like me, had all the intel on the pro racers and what they were up to pre-race. The two weeks spent with them both were so much fun and definitely helped make it the memorable experience that it was – thanks both!

As race day approached, I felt in a good place but knew that the result of the race would hinge on how well I executed my race, nutrition and cooling plans over the course of the day. I knew that I’d done the work on the latter with the hours spent in the sauna over the summer and had the experience of the nutrition plan in Nice to know what needed to be done on that front. It felt like James and I had left no stone unturned and that was a good place to be in pre-race.

Race day came and set out below is a summary of how each discipline went! 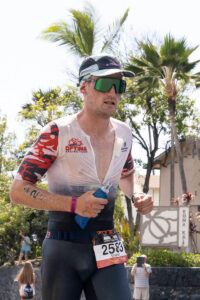 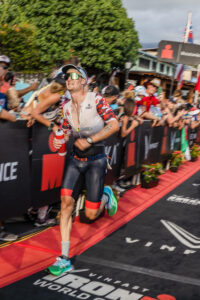 A couple of months have passed now and the achievement of racing Kona has started to sink in with the enduring feeling being one of huge gratitude. I started triathlon thinking that it would be an individual sport where discipline, hard work and, above all else, personal accountability would be the keys to doing well and whilst all of that is true, you really can’t do it (or do it anywhere near as well) without a team (and, in my case, an Optima Racing Team) around you. This report therefore wouldn’t be complete without saying a massive thank you to (1) every Optima member that I have had the pleasure of training with, drinking coffee with and laughing with over the past year – I’ve met some great people and there is no one I’d prefer to suffer with than you guys and (2) James, who has continued to push the boundaries of what I thought I was capable of and has been a great friend throughout that period – I’ve had a lot of coaches/teachers over the years, but he’s consistently got the best out of me better than any of them.