After what’s been a rather testing season (getting Covid only 5 days before my first attempt to the full IM distance in June and an unlucky ankle roll 3 weeks out of 70.3 Zell Am See at the end of August), the time had finally come for the 70.3 World Championship which seemed, for the most part of the season, ‘so far away’. 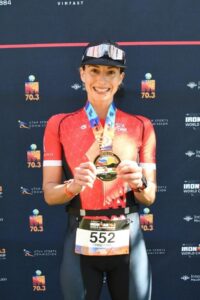 The build went very well although mentally I was definitely ready for a break at this point. Completing the IM training block had me feeling more robust than ever with all the efforts concentrating on preparing to tackle the hills of the St. George running course. This meant some long, lonely hill workouts on the Wednesdays while the rest of the Optima squad were training on the track. I put my head down and just get through it!

I flew to Vegas and made my way up to St. George 6 days before the race, a two-and-a-half-hour drive. As I crossed into Utah, the spectacular scenery of the red rocks started to reveal itself, creating a sense of awe. It was like nothing I had seen before. At the same time, it was getting colder. A lot colder than I had expected! Soon enough this started to be the talk of the week amongst all athletes preparing to race. Once again, I was lucky to have a group of teammates to share the nerves kicking in about all the important pre-race decisions! 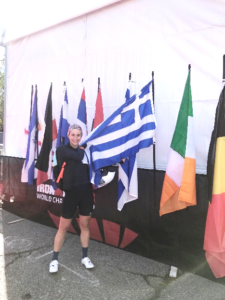 The town was buzzing as we were going through our final workouts on the course but also with the busy logistics of the split transition. Thankfully driving around is so easy in the US. Wider roads and you can literally park anywhere. Before we knew it, the race morning was upon us and we had to make our way to Sand Hollow reservoir. Heading to transition in woolie hats and puff jackets felt quite surreal. With the temperature at 4o-5o C, it was all about staying warm until the get-go but soon enough we had to drop off our bags and remain barefoot on the long walk down to the lake. We were freezing. As we were waiting to go in, the pro ladies were already coming out. Watching the likes of Flora Duffy, Lucy Charles Barclay and Paula Findlay coming out of the water could only spark a fire in my belly as I was entering the water. What a race to be in!
The water temperature was a pleasant 17o C as, thankfully, there had not been enough time for it to cool down more despite the temperature drop that week. The sun was only just coming up so sighting was tough in the dark water.

Having started racing triathlons during the pandemic, I had no great experience in mass starts or even small wave starts; 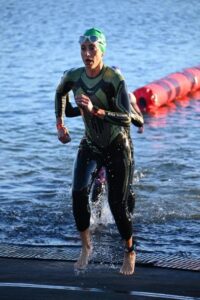 time trial formats were a gentle way to start but I was still left with that learning curve. I struggled in my last race and was more prepared now, at least mentally. My goal was to still try to find some fast feet so I could swim faster but this time I felt a little bit more ready to fight that fight. And fight I did, and it didn’t quite work but at least I didn’t find myself depleted or wanting to drop the effort. I pushed until the end but that didn’t necessarily translate to a fast swim, at least not the one I knew I could have had. Exiting the water it was time to leave it all behind and focus on what was next! Another lesson I aimed to bring from my previous race was to go as fast as possible in the transitions. So I literally sprinted up the long ramp which worked well to compensate the cold shock coming out wet in the cold, dry air. At the top of the ramp I met the ‘wetsuit strippers’, a feature unique to that race so I spontaneously approached one of them who helped me strip the wetsuit off very quickly. What a treat!

Next up was the final decision on what to wear on the bike! I had left two options of gloves in my bag and for some reason, literally in the ‘heat of the moment’, I decided that mittens would be ok… They took longer to put on than I wanted but that was it. I had already decided against arm warmers as cold on the arms is usually not a big deal for me and for the rest of the body I took some advice cascaded from the pro ranks: prioritise being more aero and opt for a piece of thermal ‘space blanket’ inside my tri suit which I had put on before the swim to cover my chest. Thankfully it didn’t seem to be an issue for the swim which was my fear, so basically I was good to go!
I don’t remember mounting my bike so I guess it went well! The cold shock came quickly enough through the first descent when I tried to pick my bottle and realised I had no feel on my hands and fingers. ‘Slowly with control’ I thought to myself, ‘just don’t drop the bottle’… 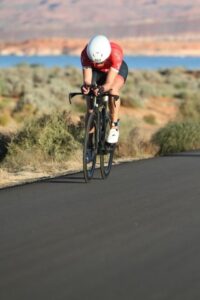 I quickly realised I had no feel on my leg muscles either and had to look at my power meter to check what my legs were doing and control the effort. It wasn’t necessarily a bad thing as it didn’t seem to slow me down initially, if anything I was overtaking a lot of people at the beginning and was wondering why they were going ‘so slow’. Noticing the different wardrobe selections kept it interesting and I tried to not have it mess with my head: I was clearly the most lightly dressed in the midst of jackets, arm-warmers, gilets and even full-length leggings! I just prayed I would warm up as the sun gradually went up and told myself that I’d be flying down the descents having no jacket on!
About an hour in, I remember thinking ‘I hope I haven’t blown my race’. After a series of descents, I was freezing still and feeling the cold air filling my lungs. Thankfully I started hitting a series of climbs and that was it! I gradually got warmer and warmer and didn’t think about the cold again. With the exception of my toes that only ‘came back’ at the top of Snow Canyon (around km 75), everything was fine and I was able to enjoy the spectacular course, racing ladies only and pushing as hard as I could. Again, the strategy was to ‘be brave’ and do better than my last race where I had gone conservatively to save my legs for the run. Basically that meant I was not thinking about the run at all. ‘I will deal with that when the time comes’, I thought, ‘I am sure I can run, somehow’.

It was a demonic downhill from Snow Canyon all the way into town, so I just tried to hold on tight and simply not crash! 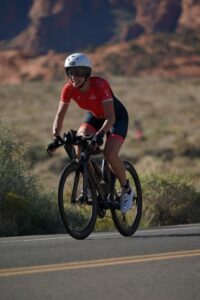 The wardrobe choice seemed to pay off as I felt I was constantly overtaking on the way down. Another treat coming off the bike were the ‘bike catchers’, taking the bikes off us so we didn’t need to rack it. Talk about royal treatment in this race!
Shoes were on and I already could feel I had probably been ‘too disciplined’ taking on all my hydration which was probably unnecessary in this cold. Hence for the first time I hit the loo right before the run exit and sacrificed a good minute there but it wasn’t really an option! I suppose I always wondered how that would work when you’re in a race rush and happy to report it was just fine!

I knew the next bit was going to be the toughest part of the race. A 4km climb from the get-go, all the way up to the golf course didn’t help pick up a rhythm and felt a bit like a slug. Looking at my watch was pointless and was going all by feel. In parallel I was deciding how to break the course in bits to go through it: that was something like ‘up-golf course-down- bit through the town’, two times over. Again, it was quite refreshing having only to race through women. No crowded trails, no shouting to overtake, and basically directly competing with everyone around me was motivating. 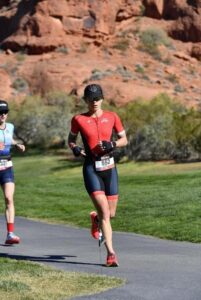 I felt strong in all aspects so I was pushing once again to the maximum. I then knew it was going to be a mental game so no excuses for slowing down or quitting! As always the key was staying in the moment.
The downhill felt like a breeze and actually helped with picking up the rhythm for the upcoming flat. That’s when first checked my watch and could not believe my pace was on the fastest side I could have aimed for! I was actually surprised and got a great motivation boost just by that! Maybe I could do well?
Of course the best thing was having teammates cheering on the course (another plus on guys racing on a separate day!) and made me just expect those points to give a high five and ‘keep going’!
As I went into the second climb I told myself ‘this is it now’, last push and then breeze down again. I kept fuelling diligently and took less water than I normally would, especially before the downhill sections as this had given me stitches in training. A great strategy as I later realised many struggled with this. I came down again so I was left with the last flat segment through the town. Unsurprisingly, this felt harder than anything I’d ever done. I remember thinking: ‘this is NOT fun, don’t you dare ever tell yourself it was fun!’ as I was going up the last hill before the finish line – what a killer! 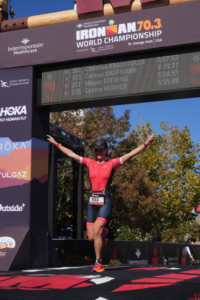 As soon as I turned at the Ironman monument and saw the finish line, the emotions started flooding. I had done it! My first World Championship race had gone well! I had taken all the risks and given it EVERYTHING I had! I put my hands up as I crossed the line as if I had won, that’s what it felt like for me! Then the kindest volunteer wrapped me with a towel and walked me to the exit as I was flooded with tears of joy and disbelief of what had just happened. What a relief to finally be able to stop resisting every instinct inside me screaming to just stop. That’s a kind of satisfaction that only an effort like this could offer.

I was then reunited with my teammates and friends finishing one by one. It is always so special to be able to share these moments with those who know what it takes and train side to side all year round! It was time for some comfort food and celebrations, and ready to cheer the men giving it some the day after!

This was my best race experience and performance to date, good enough for 18th in my age group which for me is massive! I can also safely say ‘now I get it’. I get why people are so obsessed with qualifying for World Championships, it really is special. For me, having that level of competition gave me that extra level of motivation to dig that little bit deeper. It was in that ‘place’ that I would find this ‘something’ that felt just enough to spark that will to do it all over again. Absolutely crazy! 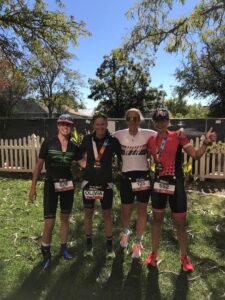