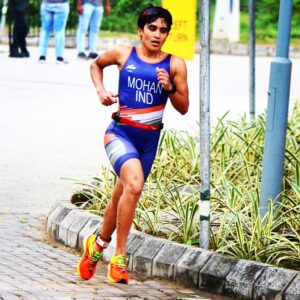 Pragnya Mohan is a professional triathlete from India who is currently over in the UK training with the Optima team. Pragnya is trying to qualify for the Paris Olympics, which if successful, in a country of 1.4 billion people, she would become the first Indian to qualify for the Olympics in triathlon. This would be an incredible achievement both for the sport in the country but also for women’s sport in general.

Pragnya is currently the first and only Indian triathlete to compete at the Triathlon World Cup, she is current South Asian and National Triathlon Champion, has won Gold Medals at South Asian Games & National Games in Triathlon and has won a total of 128 state championship medals in various disciplines.

Last month Pragnya started her journey to the Olympics in Kilifi, Kenya at the 2022 Africa Triathlon Cup where she finished 9th, and started to accumulate the ranking points required to qualify. A solid performance from Pragnya who continues to work hard with the Optima team to bring on her skills further.